Thanks to the viral capacity of social networking sites, it’s easier than ever to fire up the online world with reports that a celebrity has died. See who had the honor of being prematurely mourned in 2011.

Over the past twelve months, a number of famous names have found themselves in the unique position of learning about their own deaths online. How does one issue a denial in response to such a report? Read on as we cover 10 celebrity death hoaxes from 2011! 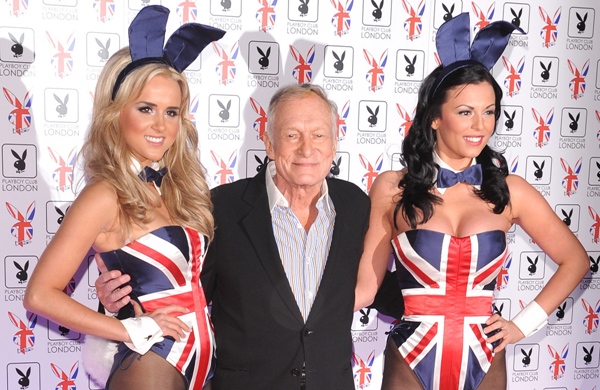 Hugh Hefner dead? If you were on Twitter in July you may have feared the Playboy mogul was no more. At age 85, the ladies man denied the death hoax rumors himself, tweeting, “The rumors of my death are, as Mark Twain observed in a similar situation, greatly exaggerated. I’m very much alive and kicking.”

Back in August, SheKnows confirmed that reports that the martial arts star had died were “not accurate,” dispelling the need for an ‘R.I.P. Jackie Chan’ Facebook group that ballooned to 82,000 fans overnight. As of today? Jackie Chan is alive and well at 57 — though that erroneous Facebook group is at nearly half a million fans!

Word on Facebook in August had it that Lil Wayne had nearly died. A fake news report put fans of the rapper into panic mode stating, “Surveillance cameras captured this fatal car crash in which 2 Young Money rappers died while Lil Wayne was severely injured!” While very much alive and in fair health, fans may soon be without Lil Wayne — he’s announced plans to retire.

Pranksters went the extra mile when it came to a December death hoax involving Scott Baio. Beyond the topic #RIPScottBaio trending on Twitter, the actor’s Wikipedia page was updated to state his cause of death as diaper rash!

David Beckham died in a car accident in September? Nope! This news report came with a disclaimer for those reading the fine print the story was for “entertainment purposes” only. Mr. Beckham is thankfully to this day happy, healthy and the father of four.

In light of his recent #winning antics, death rumors surrounding Charlie Sheen had a greater degree of believability than most would like to admit. Erratic behavior aside, Mr. Sheen remains surprisingly healthy and very much alive.

OMG! Will Smith fell off a cliff in New Zealand while filming Men in Black III? Nope, our favorite alien-slayer is both alive and, surprisingly, still married to Jada Pinkett-Smith! Rumor dodger all around.

Life in prison for tax evasion is rough — but not so bad that reports Wesley Snipes had died from a fight with another inmate turned out to be true. The 49-year-old remains very much alive, and very much locked up.

Lady Gaga did not die in her hotel room in early December. While fans can be thankful we did not have “the most awful day in the U.S. history,” there is still a factor of concern when it comes to the eccentric singer. Word has it Mother Monster has dreamt she will die the same way Princess Diana did.

Hot off the web presses we’ve got reports Jon Bon Jovi died. Like his fellow lucky death hoax listees, the crooner is in good health and great spirits — even going so far as to share photographic evidence that he remains alive!

If there’s one lesson to be learned from the online chaos happening in 2011, it’s that just because you heard a celebrity has died on the Internet doesn’t mean it’s true!