Sacha Baron Cohen’s alter ego from The Dictator has eulogized North Korea’s Kim Jong-il. See what one bad guy had to say about the other. 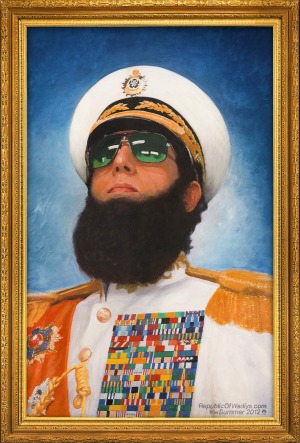 “I am saddened to learn of the passing of my dear Kim Jong-Il,” read a special press release from the Office of Information of His Excellency Admiral General Aladeen — Supreme Leader, All Triumphant General and Chief Opthamologist of People’s Republic of Wadiya.

“K-Jo was a great leader, good friend and average double’s badminton partner. He died as he lived, in 3-inch lifts. An extraordinary man, he did so much to spread compassion, wisdom and uranium throughout the world.”

“On behalf of myself, Ahmadinejad, Chavez and Newt Gingrich, we would like to welcome his son, Kim Jong Un, into the Axis of Evil.”

Jong ruled the Stalinist state of North Korea since 1994, taking over after his own father’s death. Under his reign the country became the world’s eighth declared nuclear power. He died of a heart attack on Saturday at the age of 69. His youngest son Kim Jong Un will take over his command.

News of his death put South Korea, who has technically been at war with its northern neighbor since 1950, on high military alert, but the South Korean president tried to reassure citizens.

“For the sake of the future of the Republic of Korea, peace and stability on the Korean Peninsula is more important than anything else. It should not be threatened by what has happened,” he said.

Sacha Baron Cohen’s upcoming mockumentary The Dictator will “tell the heroic story of a dictator who risked his life to ensure that democracy would never come to the country he so lovingly oppressed,” according to Paramount Pictures. It will hit the big screen in the US on May 11, 2012.