Joe Jonas hospitalized! Word of the Jonas Brothers member’s stomach woes sent fans into a Twitter frenzy over the weekend. 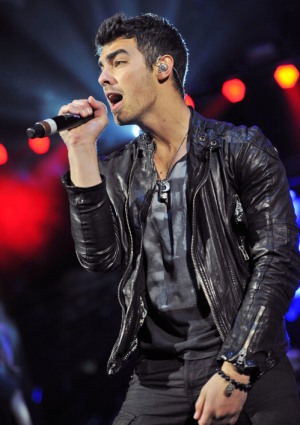 Joe Jonas is lucky to be feeling well Monday evening after suffering “severe stomach pain” over the weekend. Take it easy, JoBro fans, your favorite middle child is going to be just fine.

A rep for Joe Jonas confirmed to TMZ the singer was briefly hospitalized at Children’s Hospital in Los Angeles, but gave no explanation for the star’s ailments. The gossip site, on the other hand, points out Joe and some pals partied heartily in Chicago at Board Room Nightclub on Friday.

As word spread the 22-year-old Jonas Brothers singer had been hospitalized, fans reacted with a mixture of panic and concern over Joe Jonas’ well-being. One fan echoed the thoughts of many sharing on Twitter, “:O My Poor Joe! 🙁 I Had A Mini Hard Attack When I Seen This.” Yet another tweeted, “Imagining @joejonas sick & lying on a hospital bed really breaks my heart :'(“

Another jokingly made light of the situation writing of Joe Jonas’ hospitalization, “HE’S PREGNANT. DNA TESTS SHOW JUSTIN BIEBER IS THE FATHER. #TRUTH!!”

Putting fears to rest the Disney star, pictured here Saturday at the Sobe Lifewater Jingle Bash in Chicago, tweeted Monday, “Hey everyone I’m fine I’m fine 🙂 thanks for the concern.”

In response fans shared a sigh of relief with comments such as, “thank god. us jonas fans over react, but can you blame us?” and, “We’ll never leave you honey we were worried about your health.”

Looks like Joe isn’t joshing fans about his recovery in the least — the heartthrob was apparently well enough by Sunday evening to grab sushi at Katsuya restaurant with younger brother Nick Jonas!