Amber Portwood is looking at spending her second Christmas in a row in jail. Read on to find out what the Teen Mom did and why she’s behind bars again. 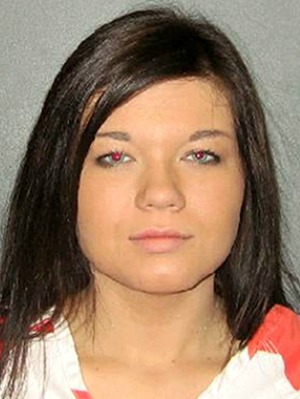 It won’t be a very merry Christmas for Teen Mom Amber Portwood. The troubled reality star is behind bars again on a parole violation and likely will not see freedom again until after the holidays.

A probation violation is what got Portwood in hot water this time after her famous temper reared its ugly head.

“She was drunk, and there was another girl in the restaurant who had been drinking too and apparently said something about Amber to her friend,” a source told Star magazine.

“Amber instigated the fight. She told the girl, ‘You don’t know anything about me! I’m gonna whup your ass!’ They just attacked each other.”

“There were a couple of punches thrown and hair pulling, then they were separated,” said the witness.

Amber Portwood calls her new boyfriend “the one” >>

A judge found Portwood in violation of her probation and threw her in the slammer.

Portwood spent last Christmas in jail after striking a plea deal on domestic battery charges. She was caught on tape beating the tar out of her baby daddy Gary Shirley during an argument on an episode of Teen Mom. As part of her deal, Portwood agreed to 30 days of inpatient treatment with outpatient therapy, finishing her high school degree, starting a college fund for her daughter Leah — and staying out of trouble. Big fail on that one.

Portwood’s next court date isn’t until Jan. 13, 2012 and she could be sitting in jail until then.