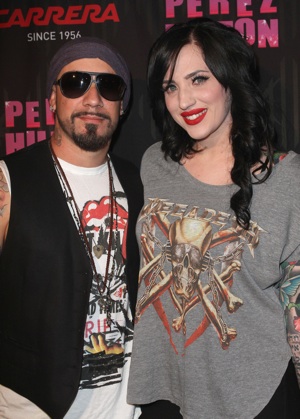 Monday morning, SheKnows spoke with Dorough, who’d just returned to Florida after attending McLean’s nuptials. He revealed that the intimate ceremony wasn’t the typical tearjerker. “It was such a hilarious wedding,” said Dorough. He wouldn’t describe it as normal or traditional but it was definitely great.

Instead of an over-the-top romantic setting, the couple opted for a Goth theme. Regarding McLean’s choice of decor, Dorough joked, “I wouldn’t expect anything less from A.J. He’s crazy out there.”

The NY Daily News reports that Karidis walked down the aisle to Guns N’ Roses “November Rain,” while wearing a Vera Wang gown. When it came to the actual vows, instead of acquiring a priest, the wedding was officiated by celebrity photographer Tyler Shields.

During the momentous occasion, the remaining Backstreet Boys happily took a backseat to the groom. “Me and the guys, we all were able to sit and watch the wedding, which was great,” said Dorough. “I actually liked being a spectator. You get the full view of everything happening.”

Once the pair were pronounced husband and wife, it was time to unwind. When it came to the reception, you couldn’t stop the guests from cutting a rug. Dorough exclaimed, “There was a lot of dancing that’s for sure. All of us, all of the Backstreet Boys were out there on the floor.”

Sounds like a fun evening. Congrats to the happy couple!