Kelly Osbourne will spend the holidays in a cast, thanks to a weekend fall in her hotel room.

Kelly Osbourne just cannot be trusted on her own two feet! The E! Fashion Police host broke her hand this weekend after falling out of a hotel bed. 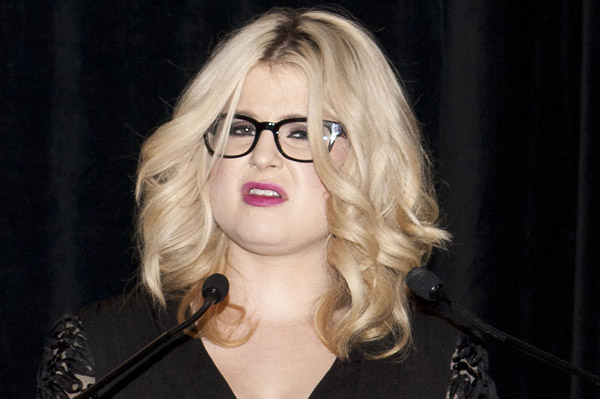 “I must be the most accident prone/stupid person it the world,” Osbourne tweeted on Sunday. “The worst part is I permanently look like I’m giving everyone the thumbs up because of the way its casted!”

Luckily, her mom Sharon Osbourne is there to help, “My mum has to brush my hair & cut my food 4 me,” she wrote. “I feel like a baby again. Of course my mum is loving it!”

This makes two serious accidents for the 27-year-old in less than two months. She was taken to a Miami hospital after slamming her head and getting a concussion.

“Long story short, I cracked my head open then kept passing out,” she tweeted at the time.

It seems like the only thing she does more than injure herself is slam her foes like Christina Aguilera. “She called me fat for years,” Osbourne said of Aguilera’s appearance at the Michael Jackson tribute concert in October. “I was never that fat.”

And Kate Middleton isn’t immune to Osbourne’s jabs, either.

“In England they’re like, ‘Look how thrifty she’s being, showing the British public that the royals are in a recession as well,'” Osbourne told Jay Leno during an appearance in August. “If I had that job I would only wear it once. If I am going to be the future bloody Queen of England I’m going to wear that dress once because I’m giving up the rest of my life, all of my privacy. At least I can get a new dress every day!”

Luckily, we won’t have to miss any of Osbourne’s jabs on Twitter — she assured fans she’ll still tweet while her left hand heals.