Paul McCartney is still rocking our world. The musical icon has a new album — and it features some very special guest appearances! 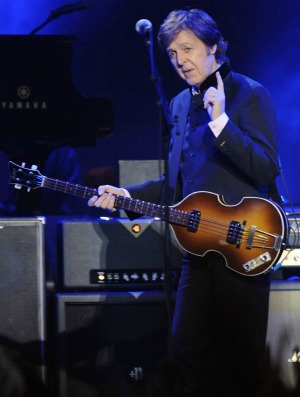 He may be pushing 70, but that doesn’t mean Paul McCartney can’t rock your world still. The former Beatle has announced he is releasing a new album of cover songs with two original bonus tracks, including pieces that were key influences on the tunes he created with the late John Lennon.

Calling the selections “the songs me and John based quite a few of our things on,” McCartney is teaming up with the likes of Diana Krall, Stevie Wonder and Eric Clapton on the as-yet-untitled album.

“When I kind of got into songwriting, I realized how well-structured these songs were and I think I took a lot of my lessons from them,” McCartney said in a statement. “I always thought artists like Fred Astaire were very cool. Writers like Harold Arlen, Cole Porter, all of those guys — I just thought the songs were magical. And then, as I got to be a songwriter I thought it’s beautiful, the way they made those songs.”

“It was very spontaneous, kind of organic,” he said, “which then reminded me of the way we’d work with the Beatles. We’d bring a song in, kick it around, when we found a way to do it we’d say ‘Okay, let’s do a take now’ and by the time everyone kind of had an idea of what they were doing, we’d learnt the song. So that’s what we did, we did the take live in the studio.”

“It was important for me to keep away from the more obvious song choices so, many of the classic standards will be unfamiliar to some people. I hope they are in for a pleasant surprise,” McCartney explained.

Two new songs are featured on the album: “My Valentine” and “Only Our Hearts,” the first of which is currently streaming to premium members of McCartney’s website for just 24 hours.

Want to hear the whole album? You’ll have to wait until Feb. 7, 2012 when it will be released by Hear Music/Concord Records.