You lost your lunch! Rihanna fell ill during a concert in Portugal over the weekend. Is her rumored excessive partying to blame? 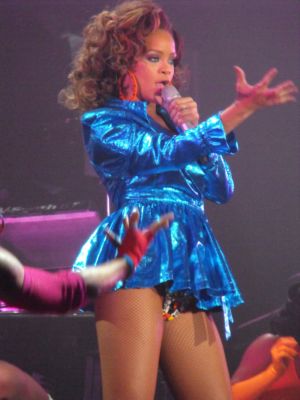 Rihanna’s known for losing her clothes on stage. This weekend in Portugal, the sultry pop star lost her lunch instead.

On Saturday night, Rihanna struggled through a performance in front of a sold-out crowd at the Atlantico Arena in Lisbon before eventually dashing off stage mid-show to vomit.

The audience was left baffled as a flustered RiRi disappeared during her performance of “What’s My Name?,” MTV News dished Monday.

The singer took to her Twitter account after the gig to explain the incident. In a series of posts, Rihanna explained that she’d been feeling ill during much of the first half of the concert.

By mid-set, the queasiness had become unbearable, forcing the star to briefly leave the stage for a quick run to the lavatory.

“Portugal tonight was legendary!!! I ran off stage to throw up, halfway through ‘What’s My Name…’ made it back just in time for ‘Rude Boy,'” she tweeted.

Some fans worried that Facebook’s Most Liked Celebrity may have been experiencing a second bout of the flu that forced her into a Swedish hospital in September.

There were also concerns that the stress of Rihanna’s recently-wrapped 101-date world tour had taken finally its toll — despite the beach breaks and posh cruises between shows. According to reports, the singer “went into meltdown” before her Dublin show last month and threatened to cancel the concert because she was so exhausted.

By the end of Saturday’s show, however, the “Umbrella” songstress was feeling well enough to hit the bar scene for a little pre-holiday partying with her backup dancers and stage crew.

“We just had our end of year/tour Christmas party!!!! We turned it into an ’80s prom, since I’ve never had one! It was so much fun!!!! I’m decked out in lace, sequins, a giant bow and hairspray,” she added in a later tweet.

Partying may actually be at the root of Rihanna’s embarrassing stage hurling, spywitnesses in the singer’s camp say.

Learning the dangers of alcoholism from growing up with an addict dad, Rihanna once swore she’d never go overboard with drinking. Lately though, the “Man Down” belter has been doing just that — according to recent gossip, that is.

“It’s getting really bad and she seems to be totally oblivious to the damage she’s doing to herself,” a concerned friend told In Touch Weekly this month.

“Instead of acknowledging that her partying is out of control, she seems to be proud of it! She actually brags about how much she can drink and thinks it’s funny when she gets so drunk she passes out,” the insider reported.

“She’s been smoking so much that it has been hurting her voice and she has to work out extra because of the amount of alcohol she drinks. They’ve asked her to calm down, but if she doesn’t, her record label may soon begin making threats.”