A former actress and wife of a plastic surgeon? Bravo obviously knew what it was doing when they cast Heather Dubrow as the new housewife of The Real Housewives of Orange County. 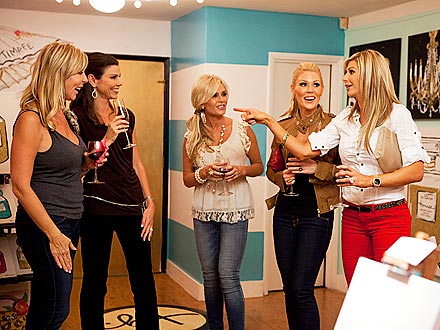 The Real Housewives of Orange County will premiere its seventh season on Feb. 7 and Bravo switched it up a bit.

For one, new housewife Heather Dubrow is a brunette. Did anyone else hear that? That’s the sound of fans gasping over the network’s choice in hair color for the new O.C. housewife.

One of these ladies is definitely not like the others. A brunette is just what this show needed to spice things up a bit!

Second, she’s a former actress and married to a plastic surgeon. That’s a bit different from the other gal pals of Orange County.

Sure, Gretchen Rossi sells beauty products/handbags, Alexis Bellino is a designer turned news correspondent and Vicki Gunvalson is a powerhouse biz lady, but Dubrow has a past all her own.

Check out a preview of what Heather Dubrow will bring to the new season. Get ready for a change in Orange County…

It also looks like we’ll be seeing more of Tamra Barney’s beau Eddie, according to a report via People.

There’s also a blurb via BravoTV.com that eludes to a nice little rivalry between Alexis Bellino and Heather Dubrow, so it’s bound to be a drama-filled season.

Head over to our comments section and sound off on the upcoming season of The Real Housewives of Orange County. What type of stories do you want to see these lovely ladies involved in?

There’s still more to the story of Vicki Gunvalson’s divorce, so you never know what we’ll learn.

Will you be tuning into the new season?