New reports claim Lindsay Lohan’s nude pictorial in the December/January issue of Playboy are being snapped up faster than newsstands can replace them. But some insiders say, “Not so fast.” 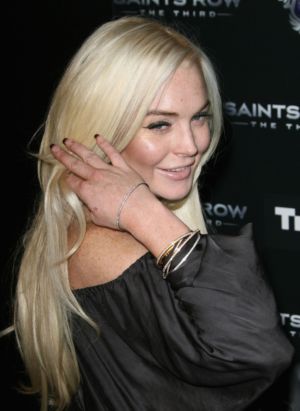 Not sure what to get your dad or brother for Christmas?

The conservative news network claims that LiLo’s nude turn isn’t doing the business it was expected to — quite likely because the entire 10-page spread leaked online before the issue even made it to newsstands.

The leak prompted Hugh Hefner & Co. to release the December/January edition two weeks early. But the move has done little to offset a hit on the market.

“No one has bought it,” was the answer from a host of news agents surveyed by Fox.

According to other reports, however, Lindsay’s Playboy issue is actually selling out in many markets, forcing some newsstands to re-order the mag to meet demand.

If only Georgia Rule had attracted such a healthy audience!

Hefner initially had doubts about putting the troubled star on the cover of his iconic magazine.

“It really came as a surprise to me. I kind of had mixed emotions about it initially, and then it turned into something bigger than life,” says the media mogul, who reportedly paid the out-of-work starlet close to $1 million for the pictorial.

“I wasn’t quite sure where she was at in her life, obviously. It depends on whether it’s Tuesday or Thursday.”

Lindsay, 24, and her family were initially reluctant for her to appear in the Marilyn Monroe-inspired spread naked. Hugh had to assure them the pictures would be shot in a classy way.

“I think it was accomplished beyond anything I could have possibly imagined. People will not forget this pictorial.”

Compliments about Lohan’s figure were not as forthcoming from 2010’s Playboy Playmate of the Year, Hope Dworaczyk.

“I just feel like if I would have known I was doing a Playboy shoot, I would have worked out more maybe,” the former Dancing with the Stars hopeful told reporters this week.