Britney Spears has been wandering around Tinseltown for several months now with random rings adorning her left hand. But this time it’s official: Brit’s engaged to wed her longtime beau, Jason Trawick. 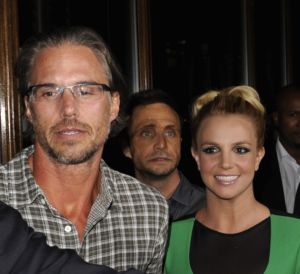 The “Circus” singer has announced that she and her longtime beau (and sometimes agent) Jason Trawick will wed sometime in the new year.

Spears has been wandering around Tinseltown for several months now with random rings adorning her left ring finger. In the process, she’s been getting us all confused about whether she’s married, getting married or what?

With her world tour wrapping up last week, the twice-married singer came home to a big surprise from Jason.

“OMG. Last night Jason surprised me with the one gift I’ve been waiting for,” Britney tweeted early Friday. “Can’t wait to show you! SO SO SO excited!!!! Xxo.”

And boy did she show us! Brit made no effort to hide the special gift — a huge diamond engagement ring — from photographers while celebrating Jason’s 40th birthday in Las Vegas over the weekend.

The dazzling diamond was designed by celebrity jeweler Neil Lane.

“Jason is a romantic and when I asked him to tell me about Britney and what the ring would represent to them so I could find inspiration, his response was always the same — she is his princess!” the jewel aficionado tells People.

Lane created the tiara-motif sparkler, with a round white diamond in a handmade platinum setting that “looks like a mini crown.”

Britney Spears is “Criminal” in her new video >>

“He’s deeply in love with her,” Lane surmises. “Britney is his princess and he is her knight in shining armor. Jason’s protective of her. He adores her. Every good fairytale needs a princess and now Britney has a ring fit for a princess!”

Trawick picked up the gem less than a week before his planned proposal. He dropped into Lane’s Los Angeles shop bearing sweaty palms and a racing heart rate, just like most grooms-to-be.

“The guy was so excited and nervous. At the end of the day, even with all the fame, he’s still a normal guy who was about to propose to the woman he loves,” Neil says.

Trawick and Spears started dating in 2009, just after Britney ended her bizarre relationship with paparazzi snapper Adnan Ghalib. Jason was her agent at the time, but he stepped down from the role shortly after they began a relationship.

The couple briefly worked together earlier this year when Trawick starred as Spears’ love interest in the video for her single “Criminal.”

This will be the third marriage for the pop princess.

“It was me being silly, being rebellious and not really taking the responsibility of what I was doing,” Spears later said.

Later that year, she married former backup dancer Kevin Federline. He’s the father of her two sons, Sean Preston, 7, and Jayden James, 6. They officially divorced in 2008.

Britney and Jason haven’t made any announcements about their wedding plans yet.

Radar Online reports that Britney wants to clear up two pending lawsuits first. She’ll also need to get her father’s conservatorship lifted before she can legally walk down the aisle.

Guess Daddy really will have to give her away!