Despite dismal ticket sales, Sherlock Holmes: A Game of Shadows locked the number one spot with Alvin trailing in second and Mission: Impossible in limited release a solid third. 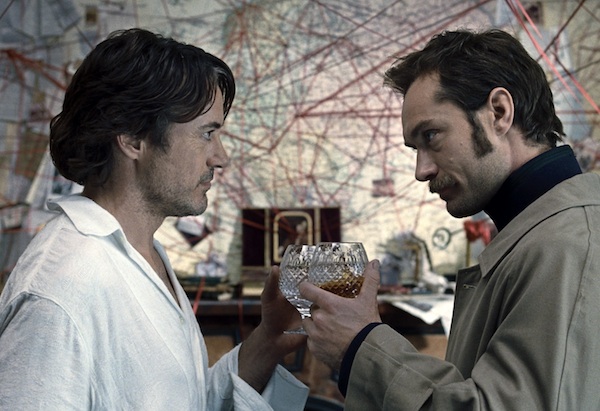 Sherlock Holmes: A Game of Shadows, the two-hander mystery action starring pretty boys Jude Law and Robert Downey Jr., takes the number one spot at the box office this weekend with an estimated intake of $40 million.

The sequel to the successful 2009 Sherlock Holmes film also directed by Madonna’s ex-hubby Guy Ritchie had ladies swooning and men cheering with its fast-paced dialogue and clever story. The original, however, opened larger its first weekend with $62 million.

Sherlock Holmes: A Game of Shadows is gritty, witty and full of hot men >>

Critics blame the economy for the slow box office; last weekend was the most dismal in sales since 2008. The third installment in the successful modern chipmunk trilogy, Alvin and the Chipmunks: Chip-wrecked, earned an estimated $23.5 million taking the second place for the weekend top 10. The film stars Jason Lee in the animated-live-action hybrid adventure movie with the singing chipmunk trio and their friends. The sequel, which opened in 2009, earned $48 million its opening weekend, and the original earned $44 million in 2007.

Jason Lee is marooned in Alvin and the Chipmunks: Chip-wrecked >>

Taking third place in the holiday box office war is Tom Cruise’s fourth contribution to the TV-show-turned-successful-movie-franchise Mission: Impossible — Ghost Protocol. Despite opening early to limited audiences (the film was only shown on IMAX screens, but releases wide Dec. 21), it earned an estimated $13 million.

Tom Cruise gets it done in Mission: Impossible — Ghost Protocol >>

The week before Christmas should add some punch to the numbers; new releases include quite a few choices. The Adventures of Tintin, The Girl With the Dragon Tattoo, We Bought a Zoo and War Horse, due out this week, should definitely shake up the list.