From the ballroom to a baby! Dancing with the Stars champ J.R. Martinez is going to be a daddy! 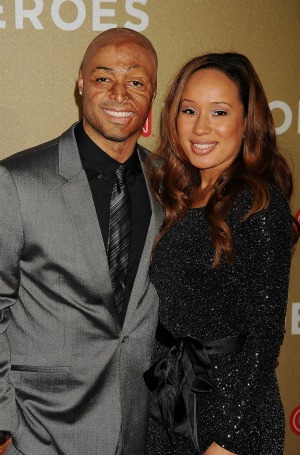 J.R. Martinez won season 13 of Dancing with the Stars, but can he handle the challenges of fatherhood?

Of course he can! This man can do it all.

J.R. Martinez revealed the big baby news and it seems he and girlfriend Diana Gonzalez-Jones are going to have to get used to the color pink.

He told People, “We found out just last week it’s a girl and we are over the moon.”

The beaming war hero added, “Diana has a little baby bump now and it’s the cutest thing ever. With the holidays coming up, this is the biggest and best gift we could get.”

So, how did the happy couple end up in this world of bliss?

The Iraq war vet and Diana Gonzalez-Jones met back in 2008.

According to the report, J.R. Martinez had just signed on to play Brot Monroe on the now nixed soap All My Children, while she was an assistant to the executive producer.

The happy couple didn’t start dating until last year, however, and the rest is beautiful history.

Diana Gonzalez-Jones was often seen in the audience during Martinez’s winning season of Dancing with the Stars, where he was pitted against Rob Kardashian in the final two.

Well, this really is quite the year for J.R. Martinez and he knows it! “2011 has been full of a lot of surprises and opportunities and ultimately, a lot of blessings,” Martinez told People.

Congratulations go out to JR. Martinez and Diana Gonzalez-Jones, whose lives are about to get a whole lot more interesting come sometime in the spring.