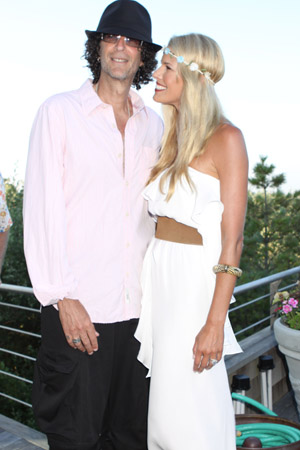 Stern is more concerned with winning over the audience, saying that parenting groups are worried that he’s “some sort of weird pervert who’s going to convert America into some kind of zombie sex fiends.”

“But I can assure you and the rest of America what I’m looking at here is to be a very good judge,” Stern said. “To sit there, I take it seriously, you know I watched the show.”

He also said he’ll tap into his fatherly instincts to judge people on America’s Got Talent.

“If you’re going to put your children on television to be judged, which by the way, I don’t know that I would ever do that with my children,” Stern said. “I raised three daughters and I don’t think that that would be appropriate. But there are parents out there who think it’s a good idea. And you got to be damn sure that this is a wise decision before you do it, because not only are you putting a kid out there, to be judged, but — you know, if a kid really does have talent, you do need time to nurture that talent, develop that talent.”

The SiriusXM radio star is also a fan of the show — and it made the decision to sign on an easy one.

“I love this type of television. And the idea that they’re coming to me I think first got started because I’ve had a rather long and lustrous radio career,” he said.

“Whatever you think of me, I’m honest and I’ll give you an honest opinion,” he added. “And my — and really my goal is to find real talent and to actually find someone who can become a major superstar.”

We can’t wait to find out.

Do you think Howard Stern will make a good judge on America’s Got Talent?