George Clooney is a dad today after adopting a little member into his household! Are he and Stacy Keibler really that serious? Not exactly… Read on to find out the details. 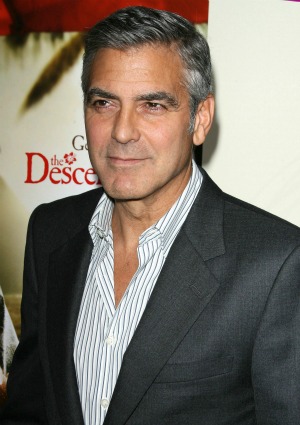 George Clooney may be the ultimate perpetual bachelor, but that doesn’t mean a guy doesn’t need something to nurture. The superstar does have some parental instincts — and he has decided to exercise them by adopting!

But he didn’t head to Africa or Asia as some of his superstar pals like Angelina Jolie and Madonna have done. No, the actor looked right in his own neighborhood first: The local animal shelter.

“I was looking for a dog because I hadn’t had one for a while — and I wanted one that was house-trained. I’m just terrible at house-training dogs,” he explained to Esquire.

“So I go online and see Einstein. They had a whole film about him. It was actually really sweet. You see him all beat up and s**t in the shelter, and they show how they cleaned him up. God, I love this dog. So I called and said, ‘I like Einstein!'”

“The woman goes, ‘Well, we don’t know if Einstein will like you.'”

“‘Yes, we’ll bring him to your house, but if he doesn’t like you, he can’t stay. We have to have good homes for these dogs.’ She sounded very serious.”

“I have this really long driveway, and I open the gate for them, and I start to panic that Einstein is not going to like me,” Clooney explained. “So I run into the kitchen, where I have these turkey meatballs, and I rub them all over my shoes.”

“This woman opens the door, and who knew Einstein was such a food whore on top of everything? He throws himself at my feet.”

“She says, ‘I’ve never seen him react like that, ever!’ And she left him with me on the spot. And forever, now, he just thinks of me as the guy with meatball feet. He loves me. I can do no wrong. He follows me everywhere.”

Note to the ladies: The same trick would probably work on men, too.

Read the rest of the interview with George Clooney on Esquire.com.