Justin Bieber is in the giving mood this holiday season — he’s telling parents how they can avoid Lame Holiday Swag with his Someday perfume. 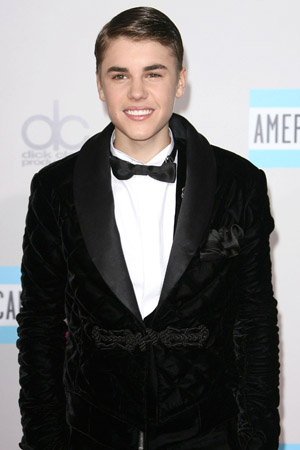 Justin Bieber is doing his part to make sure his Beliebers have a good smelling holiday. First, he talked directly to dads in a YouTube commercial for his popular fragrance, Someday.

Now? He’s telling parents how they can avoid LHS — Lame Holiday Swag. It’s apparently an epidemic sweeping Bieber fans all over the world.

“It’s a time to chill, but it’s also a time to prevent LHS,” the Biebs advises in the short video. “LHS can seriously affect your daughter this time of year. But there is hope, it’s called Someday. Someday is a perfume developed by me just for her.”

“The joy of getting Someday protects your daughter from getting LHS. Together we can stop LHS,” he deadpans.

It’s pretty cute — and it must be working. The fragrance is flying off store shelves this holiday season. However, don’t tell your daughters that Santa Claus is bringing them Someday — the Biebs doesn’t believe in him.

“My mom always told me there wasn’t a Santa. This was her logic: She thought if I grew up knowing about Santa then finding out he wasn’t real, that it would be like she was lying to me,” he said in a recent AOL Music interview. “And then when she told me about God, I maybe wouldn’t believe her. So she just wanted to be straight-up and honest with me all the time. But I didn’t tell my friends or ruin it for anyone — I was a good kid!”

“Christmas was always a time for being with family and friends — and being off school and in the snow. In Canada, there’s lots of snow so it was always good fun. My cousins, aunts, uncles and friends would come down,” he added.

Something tells us the Bieber family Christmas is going to have a lot of swag this year.