Hugh Hefner says he pushed Lindsay Lohan to get naked in Playboy and demanded reshoots when it wasn’t up to par. Read what the king of skin had to say. 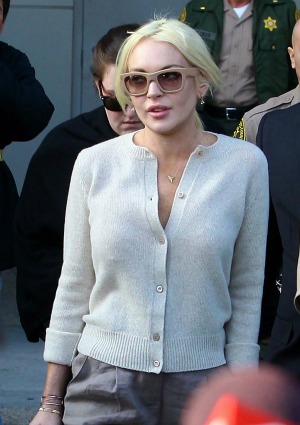 Hugh Hefner says if you want to blame someone for the Lindsay Lohan Playboy pictorial, look elsewhere — he was never convinced it was such a great idea, either.

In a sit-down with E! News, Hef says Lohan’s reputation for trouble and a failed first attempt at shooting nearly derailed the entire project.

“I kind of had mixed emotions about it initially, and then it turned into something bigger than life,” Hef said. “I wasn’t quite sure where she was at in her life, obviously. It depends on whether it’s Tuesday or Thursday.”

After he was convinced it was a good idea, he was not pleased with the first take — even coming up with the concept for the reshoot himself.

“The pictorial and the concept for the pictorial came from me,” he said. “She had done semi-nudes before. I wanted to do something that would be memorable. So what is more natural, since she is a huge fan of Marilyn Monroe, than do something that is a tribute to the red-velvet, Tom Kelley photo shot of Marilyn Monroe that was our very first Playmate?”

And we can blame Hef for convincing her to take it all off, even though every last one of her freckles was airbrushed out.

“I think it was accomplished beyond anything I could have possibly imagined,” he ruminated. “People will not forget this pictorial.”

Kind of makes you want to see how bad the originals were, doesn’t it?