The Big Bang Theory is on a roll with the Golden Globe nomination of star Johnny Galecki and the celebration of the show’s 100th episode. Keep reading to find out secrets from the big episode.

Penny and Leonard gave it go on The Big Bang Theory, but it didn’t quite work out between the scientist and beautiful wannabe actress. Don’t count them out, however. Keep reading to see what creator Chuck Lorre had to say about the couple and a possible reunion on the 100th episode. 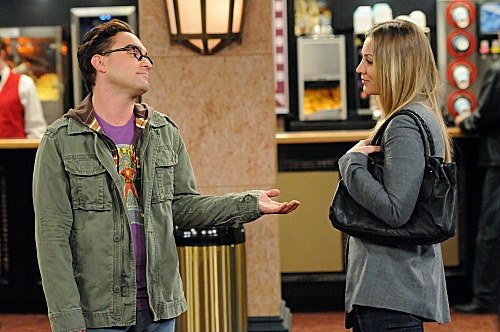 Johnny Galecki (Leonard) was nominated for a best actor in a TV comedy Golden Globe Thursday morning (Dec.15), the same day the cast of The Big Bang Theory celebrated the show’s 100th episode with a big bash.

Double the fun, double the excitement.

Check out what other stars were nominated for a Golden Globe >>

According to a report via TVLine, creator Chuck Lorre spilled a few secrets as to what fans can expect from the 100th episode and a good deal of it has to do with the show’s former, couple Leonard and Penny (Kaley Cuoco).

Chuck Lorre told TVLine, “We’ve been watching over this year how in small ways the relationship was talking at them. The friendship is going well, but then we throw in a moment where she was drunk and [said] she regretted breaking up with him.”

He added, “So, although it is a little risky, it felt like the right thing to do, to explore Leonard and Penny again in the 100th episode.”

The unlikely couple who eventually fell into each other’s arms, and beds, might not completely be over each other, but it’s not as simple as that.

Executive producer Bill Prady said, “That relationship isn’t done, but it’s also not easy. Penny and Leonard have a special connection, but they are going to have a hard time of it.”

As for the episode not feeling like The Big Bang Theory, fans can rest easy. Stars Simon Helberg (Howard) and Kunal Nayyar (Raj) said that won’t happen.

Helberg revealed, “There are some twists and turns.” Kunal Nayyar added that fans won’t scratch their heads and ask, “‘Why the heck is all of this happening? What show am I watching?'”

Nayyar added, “It is not a gimmicky episode.”

It sounds like the cast will do a bang-up job with the 100th episode. We just couldn’t resist. The episode isn’t slated to air until early 2012.

Will you watch the 100th episode of The Big Bang Theory?