Just hours after receiving a Golden Globe nomination for her performance in quirky comedy Young Adult, Charlize Theron appeared on the red carpet of its Beverly Hills premiere. SheKnows was there to get the scoop from this glowing nominee.

“I’ve been blessed,” Charlize Theron said of her life and recent Golden Globe nomination as she arrived air-kissing friends and fellow actors on the red carpet for the movie premiere of her new quirky comedy Young Adult at the Academy of Motion Picture and Sciences in Beverly Hills. 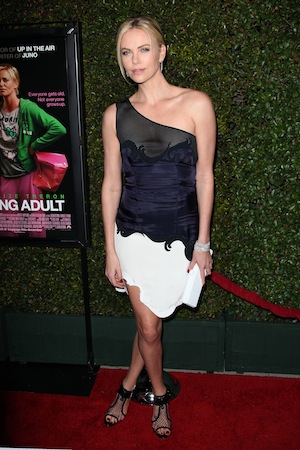 Charlize Theron steps out at the Young Adult movie premiere recalling her own young adult experiences.

The 36-year-old actress, who looked stunning in a two-toned cropped dress, plays the aging ex-prom queen who goes back to her home town to try to win her now-married-with-a-baby ex-boyfriend back. “I saw a lot of potential in this character,” Theron said when asked why she took the role.

Put on your “big girl pants”

The film was written by Oscar-winning screenwriter Diablo Cody who was also in attendance. Cody commented that being a mother definitely made her feel like an adult, but also the moment she knew she had to put on her “big girl pants” was when she started becoming a success in Hollywood.

“I suddenly had a lot of responsibility, and I had to be accountable for what I said and did for the first time in my life.”

As for high school, Cody had trouble saying it was the best time of her life.

Who did have a good time in high school, right?

Not many, it appears.

Actor J.K. Simmons, who also turned out for the premiere, agreed that high school was not his moment in the sun. In fact, he’s not quite sure if he has grown up. Simmons played the father to Ellen Page’s character in the 2007 quirky comedy Juno about a high school girl who finds out she’s pregnant. That film was also written by Cody and directed by Jason Reitman, who also directed Young Adult, making this their second joint writer-director movie project together.

Reitman arrived on the carpet to the flutter of flashbulbs with his father, director Ivan Reitman (Ghostbusters, No Strings Attached, Kindergarten Cop).

Also in attendance were Twilight‘s Elizabeth Reaser, who stars in the film as Theron’s main competition for getting her boyfriend back, and Patton Oswalt, who plays the guy everyone made fun of in high school.