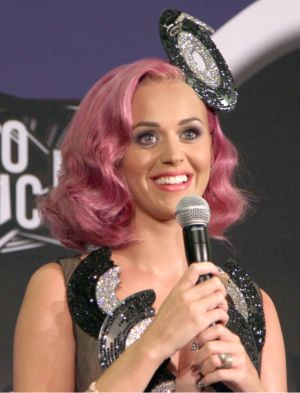 Katy Perry has been named MTV’s first Artist of the Year.

The card-carrying “California Gurl” edged out stiff competition from British songbird Adele for the coveted distinction, the network said Thursday.

Just last week, Adele was crowned Billboard‘s Best Artist of 2011 in another battle with Perry. But the “Rolling in the Deep” chart-topper failed to overtake Mrs. Russell Brand in MTV’s new annual round-up of the year’s most dangerous lyricists.

The tough decision came after some heavy debating from a panel of seven pop music experts, Amy Doyle, the network’s Chief of Music Programming explains.

The success of her sophomore offering, 21, catapulted Adele to the top of the international charts, but the panel was ultimately swayed by the enduring success of Katy’s 2010 disc, Teenage Dream.

Just take a look at her brag sheet…

In August, Perry entered the musical history books alongside the King of Pop, Michael Jackson, when she landed a fifth No. 1 hit off her multi-platinum-selling album.

Katy’s party anthem “Last Friday Night (T.G.I.F.)”climbed to the top spot on the Billboard Hot 100 — just as the Snoop Dogg-assisted “California Gurls,” “Teenage Dream,” “Firework” and “E.T.,” which featured Kanye West, had done in the months before.

The feat made Katy and Michael the only two artists in history to earn five No. 1 hits from one album. Katy’s now tied for the record set by MJ’s Bad way back in 1988.

Katy Perry gets SNL hosting advice from her hubby >>

The accomplishment was also the first for a female artist in the 52-year history of the Billboard Hot 100.

In May, the buxom pop star became another Billboard trendsetter after being named the first artist to spend an entire year in the Top 10 of the Hot 100. In May 2010, the sunny anthem “California Gurls” kicked off Katy’s record-breaking stay on the chart, spending 18 weeks hovering in the Top 10.

Additionally, Perry picked up the top prize at MTV’s annual Video Music Awards last August. The promo for her hit song “Firework” was voted the best music video of the year.

The chart successes made Katy an obvious victor for MTV’s Artist of the Year prize, network chiefs say.

“Riding high off the success of 2010’s Teenage Dream, Perry didn’t rest on her laurels,” MTV wrote in a release announcing Katy’s win.

“Instead, she set the bar even higher by hitting the road on the California Dreams Tour, where night after night, decked out in candy-colored clothes, she belted out her greatest hits and empowered her fans with tracks like ‘Firework,'” the network added.

“That anthem, originally released late last year, became so ubiquitous this year that it finds itself at #10 on MTV’s Best Songs of 2011 list. Visually, she always wanted to keep us guessing. She continually made music videos that were cinematic, tickling our funny bones at times and leaving us nostalgic at others.”

Did MTV make the right call by selecting Katy as its first Artist of the Year?