Ty Pennington and his team at Extreme Makeover: Home Edition will no longer be transforming the homes of those in need.

It’s sad to know Ty Pennington will be retiring his megaphone and his booming voice will no longer yell “Bus driver, move that bus!” 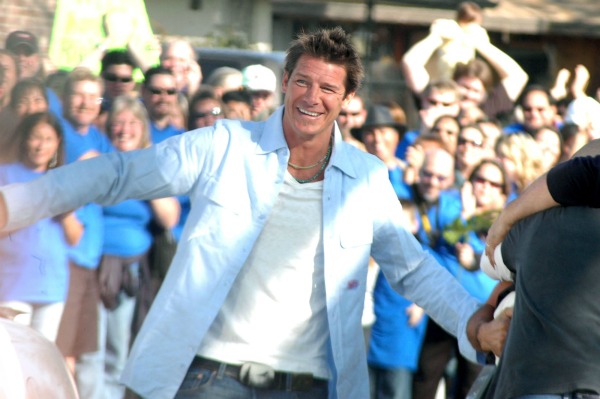 TVLine is reporting that Extreme Makeover: Home Edition, a show that helped many families in need and even saw Michelle Obama pitch in, will be taking a final bow.

According to the report, ABC has decided to cancel Extreme Makeover: Home Edition, with its final show taking place on Jan. 13.

The final episode will not only be the last show, but its 200th episode, which is a big milestone for the show that ran for nine seasons. That’s quite an accomplishment if you ask us.

So, what will the big finale include? It’s being reported the team will focus on the tornado-torn town of Joplin, Missouri. Their task will be to build seven homes — in seven days!

If anyone can do it, that team can!

Don’t worry, we know we bummed you out with the thought of no more Ty, but we’ve got a surprise for you. Four special episodes will air after the show’s final episode, according to The Hollywood Reporter.

That’s not all. Pennington will also be part of ABC’s new series, The Revolution and did you happen to catch him on ABC’s The Great Big American Auction?

Oh, that megaphone-loving man will never truly be out of our lives. Deep inside, we’re okay with that.

Starting on Jan. 20, Shark Tank will slip into Extreme Makeover: Home Edition‘s spot at 8:00 p.m. We’re not sure if Shark Tank is a better choice, but we don’t make the rules.

We know you have an opinion, so why not use it? Head over to our comments section and sound off about ABC’s decision to cancel the show.

What will you be watching instead of Extreme Makeover: Home Edition?