Glee has announced the winning schools from their Give a Note campaign! Find out which 73 music programs are getting some green for Christmas this year.

The Glee Give a Note Campaign has made the dreams of 73 schools across the country come true. Just days after Glee fans watched their favorite characters choose to get charitable in the “Extraordinary Merry Christmas” episode, the show has awarded $1 million to schools in need! 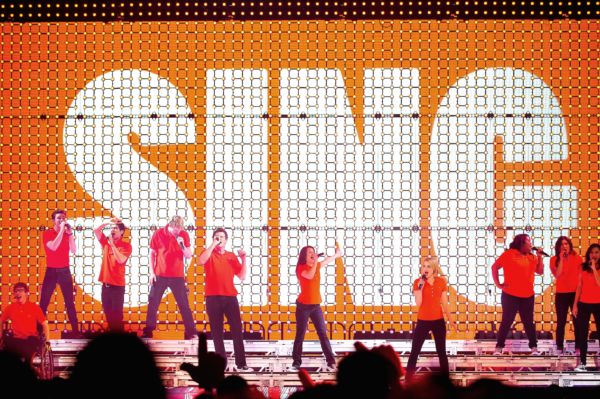 The three grand-prize winning schools announced Thursday are: P.S. 48 Joseph R Drake in the Bronx, New York; Clark Montessori Junior and High School in Cincinnati, Ohio and Phil Campbell High School in Phil Campbell, Alabama. Each school will be awarded $50,000 for their music and arts program. Additionally, 10 first-place prize grants of $25,000 and 60 second-place prize grants of $10,000 will also be awarded.

Ryan Murphy, executive producer and co-creator of the hit series commented, “Glee has always been about the importance of arts education, and Brad, Ian and I have felt strongly from the beginning that the show has a responsibility to give back. We congratulate the winners and want the thousands of students across the country who submitted to know how impressed we were with their passion and talent. Music programs were incredibly important to me growing up, and we hope that our show and initiatives like ‘Give a Note’ continue to demonstrate how much they mean to our kids.”

A note on the Glee Give a Note website congratulates the winners and sends a message to all to keep the ball rolling: “Please continue to lend your voice to the cause through support and advocacy of music education in schools.”

There’s more Glee giving going on as well! During Tuesday’s episode, the gang performed their own rendition of “Do They Know It’s Christmas?” at a homeless shelter. According to a release from Sony Music Entertainment/Columbia Records via Mike Navarra, “In the spirit of the holiday season, Glee will donate 100 percent of the net monies from the sales of their version of Band Aid’s 1984 hit ‘Do They Know It’s Christmas?’ to The Band Aid Trust.”

A round of applause for Glee generosity!