Kim Kardashian purchased jewels from another famous divorcée, Elizabeth Taylor. Find out how much the reality star dropped on some of the late actress’ baubles!

It looks like Kim Kardashian still has a few pennies left over from her doomed marriage to Kris Humphries. The reality star dropped a serious amount of cash on a few of Elizabeth Taylor‘s bracelets auctioned off earlier this week. 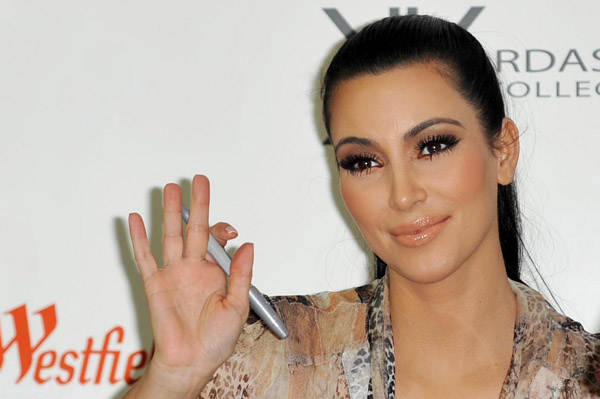 “Elizabeth Taylor was an idol of mine and I’m honored to now own something from her collection,” Kardashian told US Weekly of her $64,900 auction haul. “The Lorraine Schwartz jade bracelets are special because jade transfers energy, so I will cherish these bracelets with her energy in them for the rest of my life!”

Kimmie’s purchase wasn’t even close to the biggest at the auction. A pearl, diamond and ruby necklace given to Taylor by ex-husband Richard Burton fetched $11.8 million.

Dropping cash is only one of the things Kardashian did this week. The Kourtney and Kim Take New York star is doing her best to rehab her image by traveling with former Prime Suspect actress Maria Bello to Haiti.

“Who knew a woman who runs around on TV with a gun and another who runs around in heels would have so much in common? We were brought together through a bizzare [sic] turn of events, and we discovered our mutual goal of empowering women using our own unique voices,” Kardashian and Bello wrote in an op-ed for The Huffington Post. “We decided to journey together with Kris, Farouk Shami, Patricia Arquette, Suzanne Lerner and a few of their friends to experience the Haiti that Maria has come to know and love through her organization, We Advance.”

Mother Kris Jenner was also along for the ride — why? She’s got to be involved in everything her cash cow does.

“We came to celebrate the thousands of Haitian women who are working tirelessly every day to bring economic and social justice to all people in Haiti. So to them we say: We are humbled and moved to have been with you and to tell the world about your grace. We are proud to tell the world your stories,” they continued.

Hey Kim: $65K would do a lot to bring economic and social justice to Haiti… just sayin’.