Rooney Mara’s stellar performance in The Girl with the Dragon Tattoo has earned her her first Golden Globe nomination. As expected, the actress is ecstatic and humbled by the news. 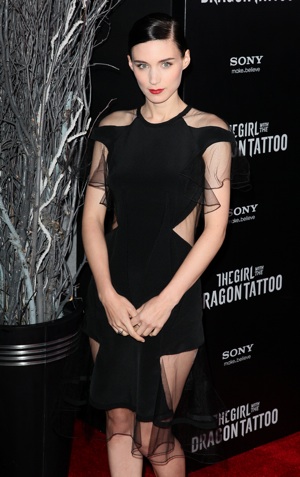 Thursday morning, the Hollywood Foreign Press announced their nominees for the 69th Annual Golden Globe Awards. The nominations list was filled with pleasant surprises including for first-timer Rooney Mara.

Mara was nominated for Best Performance by an Actress in a Motion Picture Drama for her role as Lisbeth Salander in The Girl with the Dragon Tattoo. After being snubbed by the Screen Actors Guild, the HFPA happily acknowledged the rising star.

When the big news broke, Mara was in New York prepping for a work event. She told the Los Angeles Times,  “I was like half asleep getting my hair and makeup done to go to something when I heard about the nomination. It was a very pleasant surprise. I had totally forgotten that was even happening, because I’ve been traveling for three days. I was really excited.”

The Girl with the Dragon Tattoo hits theaters Dec. 20, and Mara’s anxious for audiences to see the finished product. “I’ve never had any other experience with anything like this, so I’m just looking forward to the movie finally coming out. We all put so much hard work into it.”

The film is based on a popular Swedish novel by Stieg Larsson that was originally adapted for the screen in 2009 by Niels Arden Oplev. The original Girl with the Dragon Tattoo starred Noomi Rapace and became a worldwide phenomenon. This year, David Fincher directs an American adaptation, which has Mara stepping into Rapace’s shoes.

Is there any competition between Mara and Rapace over their shared role? Mara says no. “I think she is incredible, and I think there’s room for both performances. I think our performances are very different.”