Get your hottie fix with action, comedy and a game of wits as Jude Law and Robert Downey Jr. take on Professor Moriarty in Sherlock Holmes: A Game of Shadows. 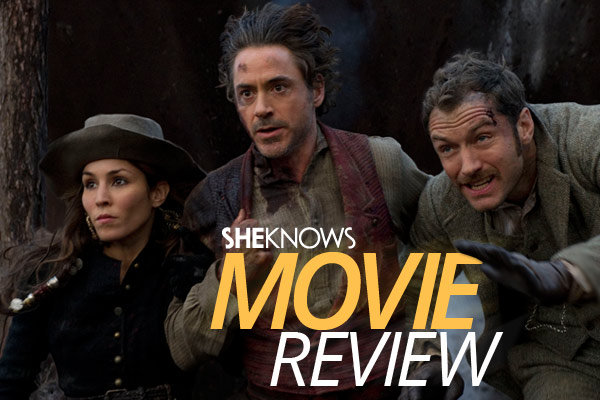 I know I’m a girl, and I’m not supposed to like action movies, but I absolutely went gaga over the first Sherlock Holmes. Gritty, witty and full of close-up shots of Jude Law and Robert Downey Jr., let’s just say I rented that one more than once.

So, I’m a fan. And as a fan, I was expecting to be completely disappointed by the sequel to a movie I loved in so many ways. I mean how could number two have the same great story, tense mystery, sexiness and swagger of the first one?

It most likely couldn’t. Sequels never bode well for true fans. They never hold up to the magic of the first film, when audiences get to fall in love (could do it a thousand times with Law and Downey Jr., are you kidding?) with the heroes of a story we are discovering for the first time.

So I went into Sherlock Holmes: A Game of Shadows a skeptic, thinking they better bring it or I’m hanging up my love of these two dudes (well almost).

So much better the second time around!

The theater went dark, and the film started and that’s when I was taken, completely taken, on an insanely fun roller coaster ride of intricate plot, witty dialogue and crime solving force with my two favorite detectives, Sherlock Holmes (played by Robert Downey Jr.) and Dr. Watson (played by Jude Law). They did it! The second Sherlock Holmes is ten times better than the first. 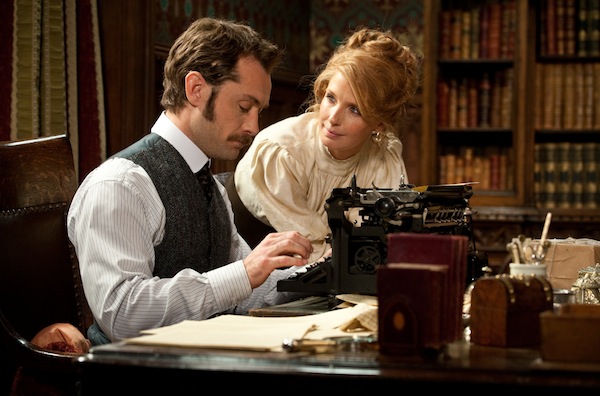 If you need a refresher — or if you’ve never read the stories by Arthur Conan Doyle — the evil, villainous Professor Moriarty is Sherlock Holmes’ biggest adversary. The first film plays out its drama with a faceless Moriarty behind the plot. This time we get to meet him in person. Performed by Jared Harris of Mad Men and The Curious Case of Benjamin Button, Moriarty is just as clever as Holmes, which makes every move even more brilliant than the last.

So, the question remains, can Holmes outsmart Moriarty before his plans to eradicate the city of its useful politicians grow into more than just a working attempt at controlling the state of peace? Things could get ugly if this guy gets any ideas about starting a global war.

The gypsy with the excellent shot

In order to stop the plot, Holmes and Watson go underground with the help of a French gypsy woman, played beautifully by newcomer Noomi Rapace, the Swedish born actress who has made a name for herself playing the lead in the original adaptations of The Girl with the Dragon Tattoo and The Girl Who Played with Fire. 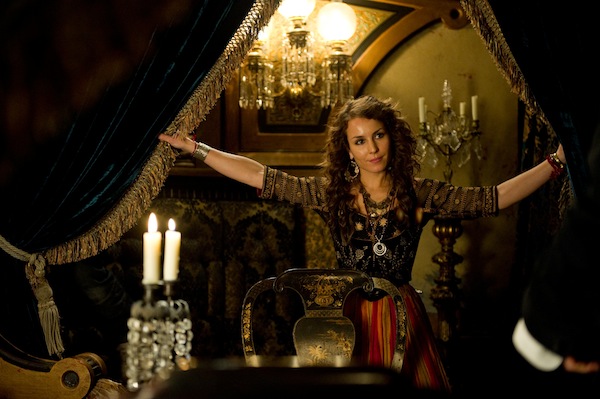 French gypsy? Does that mean we get to go to Paris? Mai, oui!

If you loved director Guy Ritchie‘s interpretation of the unpredictable, yet charming 19th century London in the first film, you’ll adore his spin on Paris. Montmartre, The Opera, Notre Dame and Pont Neuf all make a delightful appearance.

Although the chemistry of Downey Jr. and Law steal almost every scene, they aren’t without a supporting cast who can hold their own. Rachel McAdams reprises her role as Irene Adler, Holmes’ estranged love interest. Kelly Reilly of Pride & Prejudice and Above Suspicion plays Watson’s shrewd fiance, and British comedian Stephen Fry from V for Vendetta and Alice in Wonderland makes a quirky yet loveable appearance as Mycroft, Holmes’ brother. Fry brings wit, style and some rather good chuckles to his character especially when drinking his morning tea stark naked.

If you like the first Sherlock Holmes or films with action and intrigue like Ocean’s Eleven, Snatch or Lock, Stock and Two Smoking Barrels, you’ll love this. Let’s just say, Guy Ritchie can direct my movie any day. Sorry, Madonna. We heart Sherlock Holmes.

Bottom line: If Jude Law and Robert Downey Jr. bring a flutter to your heart, you don’t want to miss the gritty, clever and truly action-packed mystery that is Sherlock Holmes: A Game of Shadows.