Calling all fans of The Hunger Games: It’s up to you to unveil the latest film poster with a puzzle hunt! We’ve got piece 83/100 for you right here.

With exactly 100 days to go in the countdown to The Hunger Games, movie fans anxiously awaiting the latest film poster now have their work cut out for them: Ready, set, scour the web! One hundred pieces of The Hunger Games poster have been sent out to websites far and wide — finding and assembling them is now up to the loyal fans. 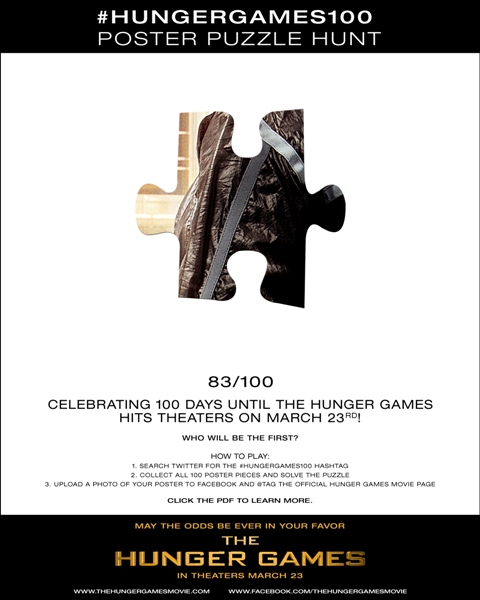 The #HUNGERGAMES100 Poster Puzzle Hunt kicks off at exactly 10:00 a.m. PST on Thursday morning. SheKnows is one of 100 sites that has been given a puzzle piece to debut. If you’re on the hunt for number 83, you’ve found the right place!

Fans can search Twitter for the #HungerGames100 hashtag to help them uncover the other 99 puzzle pieces debuted at the same time.

Collect all the pieces and put them together to unveil the poster, then post your completed work to Facebook — and be sure to @tag The Hunger Games Official Movie Page.

Want to see the poster but can’t commit to a puzzle hunt? Friend The Hunger Games Official Movie Page on Facebook and the poster will be revealed to all after the first mega-fan solves the puzzle. Need to know more about The Hunger Games 100 Days puzzle? Lionsgate has more information here.

Seen here is puzzle piece 83/100! Be sure to grab the full-size version for the game here. Any early guesses on who is featured on the latest poster? Looks like it could be a piece of Peeta (Josh Hutcherson) or Gale’s (Liam Hemsworth) coat, or perhaps our heroine Katniss (Jennifer Lawrence)!

The first film in The Hunger Games series, based on the novel trilogy written by Suzanne Collins, will hit theaters March 23, 2012.

Happy puzzle hunting today to fans — may the odds be ever in your favor!