Hollywood veteran Clint Eastwood is heading to the world of reality TV. The Dirty Harry star, his wife and two of his daughters are set to star in a new docu-series about their lives. 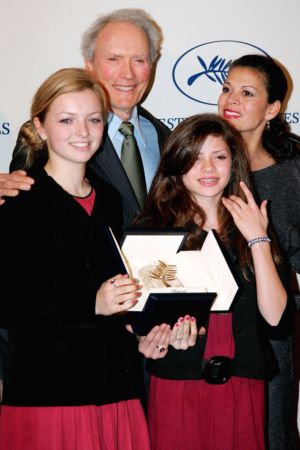 Ah — just what the world needs: A new First Family of reality TV.

Clint Eastwood‘s wife and two of his daughters are angling to become the small screen’s next big thing. The ladies are currently shooting a show in the sam vein as family-centered docu-soaps like Keeping Up with the Kardashians, The Osbournes and Hogan Knows Best.

Ok, maybe that last one was a bad example.

According to TMZ, the still-untitled series will explore what it’s like to be “Hollywood royalty” and revolve around the acclaimed actor/director’s wife Dina, their daughter Morgan and Clint’s other daughter Francesca.

Francesa, 18, was born during Eastwood’s union with his Unforgiven co-star Frances Fisher. The leggy teen is also an aspiring actress (which probably means she’ll mug at the camera a lot).

And get this: Mr. Eastwood, a multiple Oscar winner, is also expected to appear on the show. The 81-year-old Dirty Harry star has agreed to make a few cameo appearances on camera, insiders say.

But if the legendary tough guy ever has a plotline about getting a bikini wax, the entire Earth will burst into flames.

The project is being produced by top reality television producers Bunim/Murray — the same company behind the Kardashian franchise.

Clint Eastwood and Beyonce team up for A Star is Born >>

The program is being shopped to networks, but E! is the most likely home, says those in-the-know.

If it scores a buyer, the show could premiere in early 2012.

Keeping Up with the Clint has a nice ring to it.

Would you tune in for an inside look at life with the Eastwoods?