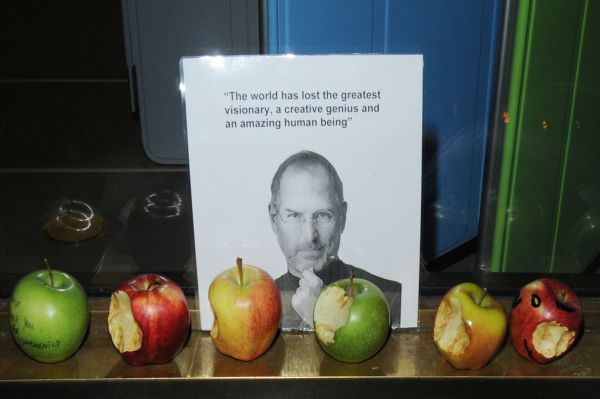 Jobs, the mastermind behind tech gizmos like Apple’s Macbook, iPod, iPhone and iPad, died in October after an eight-year battle with pancreatic cancer. He was 56.

“All his life, Steve Jobs could see things other people couldn’t see,” Walters said during her annual TV special, The 10 Most Fascinating People of 2011, which aired on ABC Wednesday night.

Is a Steve Jobs movie in the works? >>

The 90-minute special highlighted some of the year’s most prominent names in entertainment, sports, politics and business and how they’ve solidified themselves as toast-makers in the eyes of the veteran newswoman.

This year, Walters took note of Jobs. She championed the down-to-earth mogul, who dropped out of college and launched the Apple brand in his parents’ suburban San Francisco garage in 1977.

“He embodied qualities you rarely see in one person,” she said.

“It’s hard to imagine there ever being anyone quite like him again. He was a computer geek and a visionary, a romantic and a businessman, a Buddhist and a marketing genius. He was the smartest person in the room since childhood. He always thought he was right and he almost always was,” Barbara added.

Babs is one of many Americans “fascinated” by Jobs. A biography about the former Apple CEO was Amazon’s best-selling book this year, despite only hitting store shelves and electronic readers in late October.

Steve Jobs by Walter Isaacson, which went on sale on Oct. 24, less than three weeks after Jobs’ death, topped the list of Amazon top-selling books for 2011.

“Even though it was published in October, the sales have been phenomenal in both formats,” Chris Schluep, Amazon’s Senior Editor of Books, said on Monday.

57 mins ago
by Sara Kitnick

Is Tayshia Adams Replacing Clare Crawley on The Bachelorette? Here’s What We Know