Angelina Jolie is breaking down what each of her kids are like — and their little personalities couldn’t be more different! 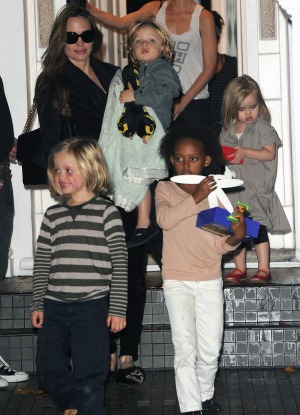 What are Angelina Jolie‘s kids like? You might think they’re spoiled because their parents are so rich, or they act like wild animals because with all that traveling they can’t possibly have any kind of routine. You’d be wrong — at least, according to what the mother of six cares to share about her brood.

In an interview with Marie Claire, Jolie sat down and described each one of her kids — and they are all as different as night and day.

First up? The youngest, twins Vivienne and Knox. Calling her baby daughter a “girlie girl,” Jolie said, “She is so elegant and delicate. Vivi will pick flowers from the garden and put them in her hair.”

“She likes to get her nails done and collects stuffed animals. It’s very funny for me to have to buy all things pink and watch princess movies!”

Alternately, “Knox is very much a dude. Very physical, tough. He loves dinosaurs and swords,” she said.

Angelina Jolie: Brad Pitt is the “love of my life” >>

Shiloh, who has been known as a tomboy since she was the same age as the twins, has taken up “riding [four-wheelers]” and “She doesn’t want to learn about the brakes. She just wants to go! It’s the combination of the two of us,” Jolie says of her firstborn biological child with partner Brad Pitt.

Six-year-old Zahara has taken up an exciting new hobby. “She’s begun horseback riding. She has found her thing,” Jolie explained.

Who’s the troublemaker in the family? That would be eight-year-old Pax. Jolie said he is “extremely wild… but he has a very, very good heart. You know, like those punk rockers — when you really get to know them and they are just pussycats. But at the same time, he is going to get into some kind of trouble.”

Regardless of their differences, there is one thing all the kids love: Seeing their parents get romantic.

“If they see Mommy and Daddy in need of some private time ’cause they’re going to kiss and whatever, the kids get all giggly and happy. Because it gives them some security,” Jolie said.

Read the entire interview with Angelina Jolie in the January issue of Marie Claire.