How cozy! The American Horror Story house is up for sale. Think there will be any buyers?

American Horror Story is one of the creepiest shows on television right now and we cannot imagine closing our eyes and getting a good night’s sleep in that house. 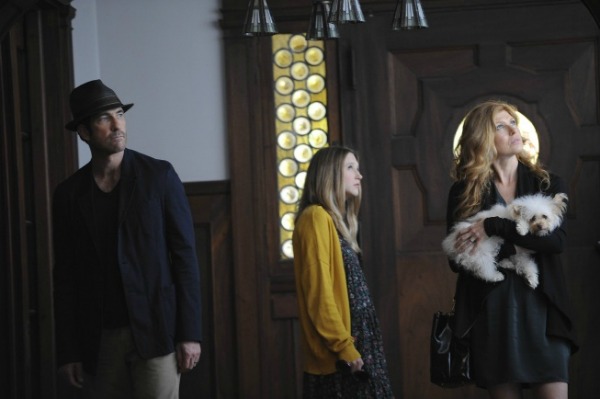 If you’ve always wanted a house that comes with a few ghostly stories, thanks to FX and the magic of TV, then the American Horror Story mansion might be just what you’re looking for.

According to People, the six bedroom mansion is on sale for $4.5 million. Who wouldn’t want to drop that kind of cash to be the envy of all their friends?

Well, most of those friends might run screaming knowing it was part of a show that includes ghosts, but it’s a steal — right?

Now, before you freak out and scratch your head wondering why the house would be for sale with season two still being in the works — here’s the answer: Cinema Blend is reporting that the house was used to shoot the pilot and that there have been replica sets built.

Does that change anything?

Anyway, back to the deets on the house. The report reveals that the Alfred F. Rosenheim Mansion is a “three-story home plus a grand ballroom (formerly a chapel) that features Tiffany stained glass windows and light fixtures.”

If that isn’t enough to help you get out your wallet, the listing placed by real estate agent Joe Babajian and reported on by People, lists other amenities like “six vintage tile fireplaces” and a “solarium overlooking the 30,000 square foot lot.”

People talked with American Horror Story actor, Evan Peters, and it sounds like this is one person who won’t be putting up the $4.5 million to own a piece of the mansion.

Evan Peters told People, “I would never, ever want to live in that house.”

A rubber weirdo and fetuses in jars? Yeah, just watching the show makes us pretty certain, when it came down to it, we wouldn’t move our furniture in anytime soon.

We want to hear from you. Would you be able to live in the American Horror Story house?