Crowdrise and Firefox team up with celebrities to raise money for their favorite charities. Find out how you can get in on the action.

‘Tis the time of year to do good — and celebrities are taking that to heart by signing on for the Mozilla Firefox Challenge to benefit Crowdrise. 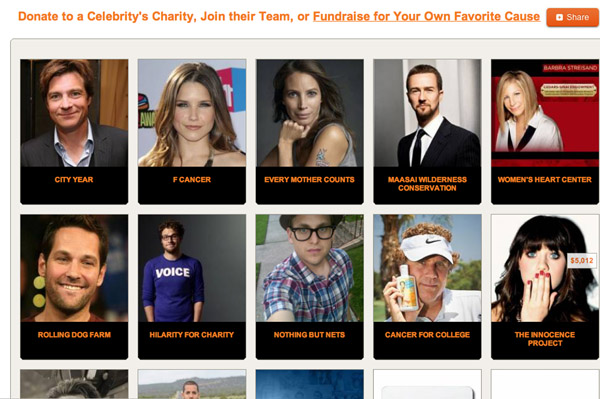 Twelve celebs — including Seth Rogen, Jonah Hill, Barbra Streisand and Will Ferrell — have signed to compete for a $25K prize for their favorite nonprofit. The goal? Raise the most money on the micro-giving site, Crowdrise.

“I like Crowdrise because I can help a great charity like Alzheimer’s Association and do it without showering or getting out of my sweatpants,” Rogen said of why he’s participating.

Us mere mortals can get involved, too — just go to the Crowdrise/Firefox Challenge page and start a campaign for your favorite charity. The person who raises the most money by Jan. 12, 2012, will get $25K for his or her fave charity.

You can also win some prizes, including “a poster from the film Milk, signed by Sean Penn, an iChat with Seth Rogen, a visit to the set of Arrested Development with Jason Bateman, and an outgoing voicemail greeting recorded by Paul Rudd,” according to Mozilla CEO Gary Kovacs.

“As part of Mozilla’s commitment to making a difference, this holiday season we are hoping to get everyone in on the spirit of doing good,” he said. “We share a vision of making big changes in the world through community and collaboration. We’re excited to work together with Crowdrise to turn individual action into global impact.”

Crowdrise was founded in 2010 by Edward Norton, Shauna Robertson and Robert and Jeffro Wolfe after they raised a bunch of cash for the Maasai Wilderness Conservation Trust during the 2010 New York City Marathon.

“I’m thrilled so many of my friends in film wanted to join in this Mozilla Firefox Challenge,” said Crowdrise co-founder Shauna Robertson.

“Mozilla is an open-source platform for innovation and Crowdrise is the same for the fundraising world,” added Norton. “So it only made sense for us to join forces.”

Will you join the competition?