Lindsay Lohan received something she’s never received before: A positive report from her probation judge! 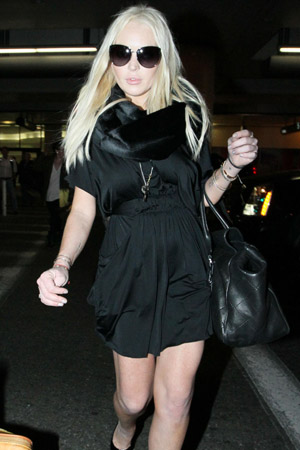 “Miss Lohan, you have actually done your work, and not only done it, but done it early,” Sautner told the actress during the 10-minute court hearing. “Do more days a month and we can end this in February, possibly.”

“I think she likes to come see me. I think that’s her motivation,” Sautner joked, according to the Associated Press. This is a far cry from Lohan’s last stop in court — she went to jail after that one.

Many Lohan watchers were concerned she’d take another step back in her probation after she missed her Tuesday flight from Hawaii. The actress was vacationing on the island state when her purse was stolen. It was later found, minus $10K of Lohan’s cash.

She did miss a taping of Ellen, though. Lohan was supposed to be on the show to debut her Playboy magazine spread. Instead, Paris Jackson took her spot on the show.

Could this positive report mean the troubled starlet is putting her constant stream of trouble behind her? We’d like to think so, though we’re not betting on it — yet.

One thing we do know? She’s still intent on being this generation’s Marilyn Monroe.

“Sex and sexuality are a part of nature, and I go along with nature,” Lohan said in her Playboy interview. “I think Marilyn Monroe once said that. I certainly agree with her… Knowing yourself and your body is so important because it gives you confidence, and in life, women need confidence. It’s a very male-dominated world to begin with, so knowing yourself and being comfortable with your body is an important thing for me as a woman. Everyone is entitled to their opinion, but this is mine.”

Do you think Lindsay Lohan is finally on the right track?