The late Elizabeth Taylor is living on — through her jewelry! Find out how much her beloved baubles sold for at auction.

Elizabeth Taylor’s memory is living on through her jewelry — the late actress’ bauble collection raked in a whopping $115 million during an auction at Christie’s in London. 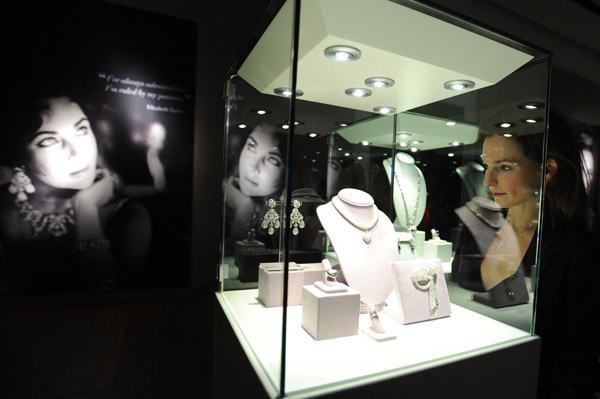 A pearl, diamond and ruby necklace called La Peregrina — given to Taylor by Richard Burton in 1969 — pulled in the biggest amount: $11.8 million. A 33.19-carat diamond ring — expected to sell for no more than $3.5 million — brought in an impressive $8.8 million.

That’s not the only items from Taylor that were up for auction: 189 pieces — including scripts and other memorabilia — went on sale Wednesday with a portion of the proceeds going to the Elizabeth Taylor AIDS Foundation.

Taylor passed away in March after battling health issues for several years.

The legendary Cleopatra actress had a lifetime love affair with jewelry that surpassed the tenure of her eight marriages. She even wrote about this love in her book Elizabeth Taylor: My Love Affair with Jewelry.

In the book, Taylor showed off photos of her favorite baubles and talked about the man and the story behind each piece like it was a child.

“First Mike put it around my neck and smiled,” Taylor wrote of the ruby-and-diamond necklace given to her by third husband Mike Todd. “Then he bent down and put matching earrings on me. Next came the bracelet. Since there was no mirror around, I had to look into the water. The jewelry was glorious, rippling red on blue like a painting.”

“I shrieked with joy, put my arms around Mike’s neck, and pulled him into the pool after me,” Taylor added. “It was a perfect summer day and a day of perfect love.”

She was also in love with the 29.4-carat diamond engagement ring Todd gave her. “I take care of it. It’s part of me, and I’m here to protect it,” she wrote of the ring.

Taylor even described how she brought in the tiara trend when she wore one to the Academy Awards one year.

“When Mike gave me this tiara, he said, ‘You’re my queen, and I think you should have a tiara,'” Taylor wrote. “I wore it for the first time when we went to the Academy Awards. It was the most perfect night, because Mike’s film Around the World in 80 Days won for Best Picture. It wasn’t fashionable to wear tiaras then, but I wore it anyway, because he was my king.”

Would you spend that much on Elizabeth Taylor’s jewelry if you had the cash?