Janice Dickinson hates Kim Kardashian’s guts — and she wants everyone to know about it. Read on to find out the nasty words the former model had for the reality star. 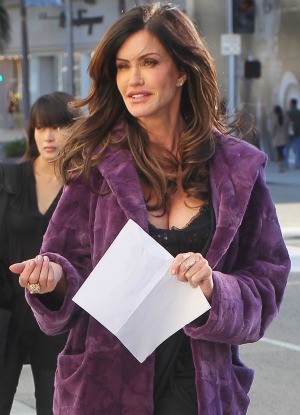 Apparently Janice Dickinson and Kim Kardashian are not BFFs. The self-proclaimed original supermodel had some super harsh words for the reality star — and it sounds like it is all because Kim does not want to be besties with her.

“Paris Hilton, Kim Kardashian? Sluts, whores and sluts. That’s what they are,” Dickinson snarled in an interview with Star magazine.

The Kardashians are “f**king idiots” >>

“It’s time for the public to realize it and remember you look at this every night — you’re endorsing a fake marriage,” said an extremely irate Dickinson. “That fake sham marriage was disgusting because they did it for money… She’s a fraud, she’s a hoax.”

After calling Kardashian’s famously round bottom a “heap of lard,” we finally get down to the bottom of why Dickinson is so ticked: The Kardashian clan has “snubbed her for years.”

In fact, it has gone on so long that when Dickinson and Kim ran into each other on the set of Good Morning America, she claims momager Kris Jenner had to force Kim to be nice.

“I just looked at her and said, ‘Are you serious? She’s fake and you’re fake,’ and walked away,” she said.

The former model is on quite a tear lately. Last week, Janice Dickinson said America’s Next Top Model is rigged, claiming that it is Cover Girl, not the judges’ panel, who really decides the winner.