Demi Moore says that despite what fans say, the last thing on her mind right now is changing her Twitter handle. 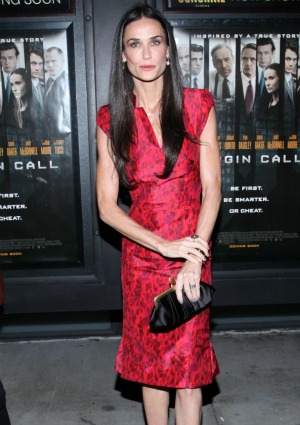 Think Demi Moore should change her Twitter handle from @MrsKutcher now that she and Ashton Kutcher are divorcing? Frankly, she doesn’t give a crap what you think.

Moore says she has bigger fish to fry than what she names herself on Twitter, and she’ll thank you to shut up about it.

Responding to criticism that she should change her name if she doesn’t intend to be the legal @MrsKutcher anymore, the actress wrote, “Changing my twitter name isn’t a top priority right now. sorry it bothers so many of u. should I not tweet until I do? does it really matter?”

What could possible take priority in Moore’s life over Twitter? First there’s that small matter of the couple’s $290 million that still needs to be divided. This should be old hat to Moore, who reportedly received a $90 million payout when she and Bruce Willis split.

Then she has to deal with that pesky one-night stand of Kutcher’s. Sara Leal is still talking about their liaison to tabloids, months after the fact.

Let’s not forget the slap in the face it must have been to see Kutcher flirting up a storm with Lea Michele at the premiere of New Year’s Eve, complete with the Glee star unabashedly asking the technically still-married Kutcher on a date.

Last but not least, there is Chelsea Handler ripping Moore and Kutcher for having an open marriage — a juicy tidbit for sure, but one that has never been confirmed by the couple.

So yeah, Twitter is probably the last thing on her mind. But when she is ready to make the change, we have 10 new Twitter names Demi Moore can consider!