Lindsey Vonn claims that Tim Tebow isn’t the reason for her divorce. Some aren’t so sure. Read on to make your own assumptions.

Denver Broncos star Tim Tebow is getting attention this week for something besides his faith or talent on the football field. The quarterback, 25, is rumored to be the catalyst behind Lindsey Vonn’s recent divorce. 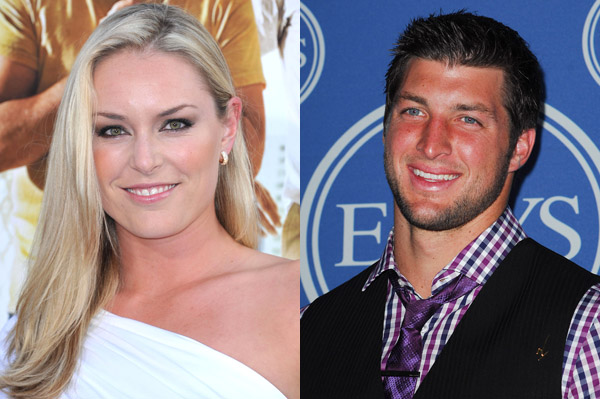 “It seems that everyone in the ski racing world knows,” an anonymous tipster wrote in an email to Deadspin. “Tim Tebow is the other man in the Lindsey Vonn divorce.”

We’re having a hard time believing this — Tebow is a devout Christian who has publicly stated he intends to remain a virgin until marriage. He’s endured such constant ridicule from football fans for his faith, that it’s hard to believe he’d abandon his views to break up a marriage.

Perhaps the tipster meant the Olympic champion left her husband to free herself for a relationship?

“A lot of people are wondering what’s up with me and the Tebows,” Vonn wrote in her column for the Denver Post. “I’m just friends with the family. I met Tim and his brother Pete at the ESPY Awards like three or four years ago in the gym — we were working out there. I spent more time with Tim and his brother at the V Foundation Golf Tournament, and this year at the ESPYs.”

They got more acquainted at this year’s sports awards when she invited him skiing.

“Tim presented me with my ESPY award this year, and we kind of chatted. I said, ‘If you want to come up to Vail and ski, let me know.’ [Tim’s older brother] Robby invited me to one of their games a few weeks ago. Then we ended up being able to race at Beaver Creek, so he came up for that last Wednesday.”

So, it doesn’t appear that anything nefarious going on between the two superstar athletes — it’s just a good friendship based on their mutual interests and talents.

“I pretty much know their whole family now. They’re great people. It’s pretty awesome to be able to hang out with them — and to be able to witness the amazing things Tim and the Broncos can do.”

Plus, he inspires her as a person.

“I really get inspired by other athletes. I like to believe that the impossible is possible, and people like that make you believe,” she added.

What do you think: Did Lindsey Vonn get divorced over Tim Tebow?