Paris Jackson shows us that the apple didn’t fall far from the tree with her appearance on Ellen. How does she really feel about those famous masks?

Lindsay Lohan, who? The Playboy starlet was a no-show during Tuesday’s taping of Ellen, thanks to a missed flight from Hawaii. No matter, though: Paris Jackson graciously stepped in to take Lohan‘s place on the show. 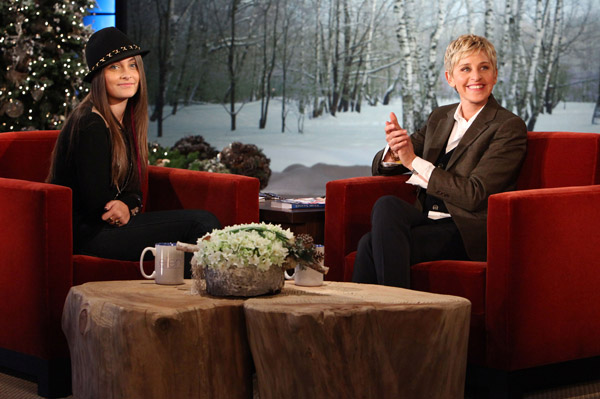 The verdict? Paris would make her father, Michael Jackson, proud.

The oldest of the King of Pop’s three children appeared on the show — airing Thursday — to talk about her father and her latest acting gig.

“I was really little. My dad was in the movie Moonwalker and I knew he could sing really well, but I didn’t know he could act. I saw that and I said, ‘Wow, I want to be just like him,'” she revealed.

The mature 13-year-old has her first feature role in the fantasy film Lundon’s Bridge and the Three Keys.

Jackson said her father taught her about acting — he gave her prompts and instructions on how to emote. “We would do improv together. He would give us little scenarios. He would say, ‘OK, in this scene, you’re going to cry,’ and I’d cry on the spot,” she said.

We first got to know little Paris when her father passed away from a lethal dose of propofol in June 2009 at 50. She — along with brothers Prince Michael and Blanket — appeared at Michael’s tearful tribute. They clearly love their father, but Paris revealed she wasn’t happy with one of his quirks.

“I’m like, ‘This is stupid. Why am I wearing a mask?'” Paris said of her father’s choice to put them in masks while in public. “But I kind of realized the older I got, like, he only tried to protect us and he’d explain that to us, too.”

The most important thing she remembers about her father is his advice. “He said, ‘If I die tomorrow, always remember what I told you.’ I took his advice and I remembered everything he told me.”

We can’t wait to see how she matures — she’s going to be a superstar.