It’s official: Awards season is fully upon us. On Wednesday morning, Regina King and Judy Greer announced the nominees for the 2012 Screen Actors Guild Awards. The 18th annual prize-giving airs Jan. 29 at 8 p.m., ET/PT on TNT and TBS.

The Screen Actors Guild, or SAG, just announced the men, women, shows and films that will vying for statuettes at the 2012 ceremony, airing Jan. 29 at 8 p.m. ET/PT on TBS and TNT. 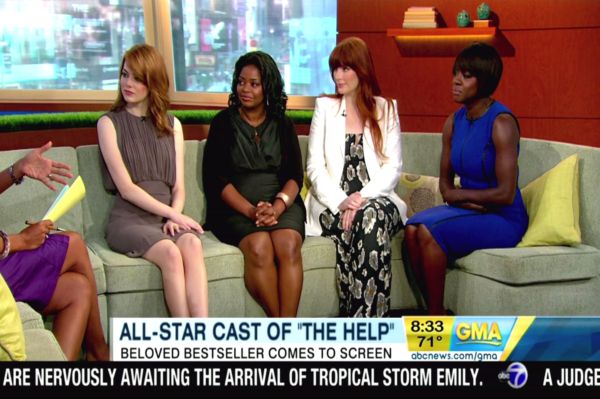 The story of black maids who agree to share stories of their tough lives with an aspiring white writer at the start of the civil-rights movement in 1960s Mississippi nabbed four noms at this morning’s nomination ceremony.

Viola Davis is up for a best actress prize. Jessica Chastain and Octavia Spencer will compete in the best supporting actress category.

The adaptation of the best-selling novel was also nominated for best ensemble cast, where it’ll have company from the silent film The Artist, the femme-driven knee-slapper Bridesmaids, George Clooney’s family drama The Descendants and the romantic fantasy Midnight in Paris, directed by Woody Allen.

Joining Davis as best actress contenders are Glenn Close, who disguised herself as a male butler in 19th-century period piece Albert Nobbs and Meryl Streep for her portrayal of British Prime Minister Margaret Thatcher in The Iron Lady.

Rounding out the category are Tilda Swinton — up for her role as a grief-stricken woman coping with her son’s horrible deeds in We Need to Talk About Kevin — and Michelle Williams, who plays screen legend Marilyn Monroe in the newly-released drama My Week With Marilyn.

For best actor in a movie, SAG voters nominated Brad Pitt in Moneyball; George Clooney with The Descendants; Leonardo DiCaprio for Clint Eastwood’s J. Edgar; Jean Dujardin in The Artist; and Demián Bichir for A Better Life.

In the TV arena, many of the nominees include favorites from past seasons; think Boardwalk Empire, Breaking Bad, Dexter and The Good Wife.

Game of Thrones is the lone newcomer in the best ensemble category.

Television veteran Mary Tyler Moore — who underwent surgery for a brain tumor earlier this year — will be presented with a lifetime achievement honor.

The nominations are among the first major honors on the long road to the Feb. 26 Academy Awards.

The Screen Actors Guild Awards are among the most-watched honors during Hollywood’s film awards season. The nominees typically to earn many votes from members of the Academy of Motion Picture Arts and Sciences, which gives out the Oscars.