Time magazine has revealed its Person of the Year for 2011: People who dare to protest.

Those Occupy Wall Streeters are really on to something. 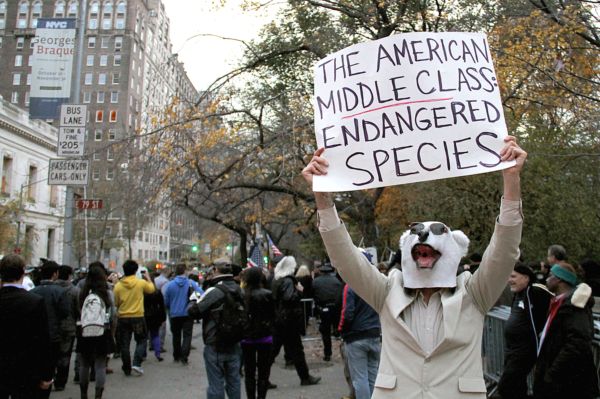 Just ask the folks over at Time magazine.

“The Protester” has been named the mag’s 2011 Person of the Year.

Time‘s Person of the Year is an annual hat-tip given to the person or thing that has most influenced pop culture — good, bad or indifferent — over the past year. The magazine has been doling out the title for the past 84 years.

Time editor Richard Stengel announced the selection for this year’s Person of the Year on The Today Show Wednesday.

Time says it’s recognizing protesters because they are “redefining people power” around the world. The publication credits those who dare to raise their voices to reshape global politics — even as dissent erupts across the Middle East and Europe.

Stengel points to the Occupy Movement’s spread to major U.S. cities as evidence.

The movement took flight when Occupy Wall Street protesters took over Manhattan’s Zuccotti Park on Sept. 17. They remained camped out there for nearly two months. The protesters made international headlines by protesting “corporate greed” and setting up their own self-sufficient community, complete with health services and a makeshift cafeteria.

Last year, Facebook magnate Mark Zuckerberg was tops on Time’s year-end ranking of the world’s most influential people. Federal Reserve Chairman Ben Bernanke was Person of the Year in 2009. Bernanke was preceded by then-President-elect Barack Obama, the 2008 title-holder.

Other previous winners have included rock stars, entrepreneurs and heads of state. Bono, President George W. Bush, Amazon.com CEO and founder Jeff Bezos and even the computer are all former Persons of the Year.

Time isn’t the only entity entranced by the tenacity of “The Protester.” MTV is currently casting Occupy protesters to appear on the upcoming season of its longest-running reality series, The Real World.

Jersey Shore producers Bunim/Murray are on the hunt for people participating in the ongoing Occupy phenomenon to appear as cast members on The Real World 27.

The docudrama, which places a group of strangers together in a house, is considered the granddaddy of the reality sudster format. It premiered in 1992 and has been a staple on the airwaves ever since.