Former American Idol champ Fantasia Barrino is a mom again. The “Truth Is” singer welcomed a son in North Carolina this week. Is her married boyfriend the father? 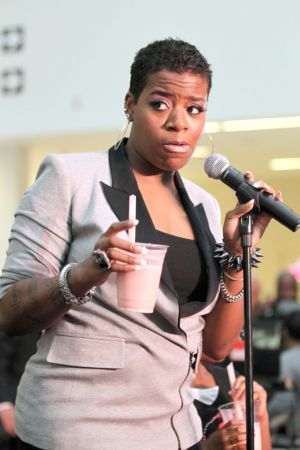 Fantasia Barrino, who rose to prominence as the winner of the third season of American Idol, is a new mom.

The Grammy winner, 27, welcomed son Dallas Xavier on Dec. 13  — a bit earlier than his mom had been expecting. Little Dallas wasn’t due to arrive until Dec. 29.

The baby made his big arrival at Presbyterian Hospital in Charlotte, North Carolina.

“I feel so blessed that my son Dallas Xavier was born healthy and is a wonderful new addition to our family,” Fantasia told People Tuesday.

“I thank all my fans for their well wishes and continued support.”

Barrino is still being mum about the baby’s daddy. All signs point to the still-attached Antwaun Cook, who the singer has been romantically linked to since 2009.

Last year, the “Baby Mama” singer confessed that she’d had an affair with the married cell phone salesman, a father of two, that resulted in an earlier pregnancy.

Fantasia later had an abortion.

Fantasia won’t hide pregnancy from “none of y’all” >>

But not before she attempted suicide and was sued for “Alienation of Affection” by Cook’s estranged wife, Paula. Mrs. Cook’s suit claimed Barrino aided in the destruction of her marriage by knowingly engaging in extramarital “sexy times” with Antwaun.

In September 2010, a North Carolina judge ruled that Antwaun and Paula were separated when he and Fantasia began dating in the Summer of 2009.

The court’s decision made it impossible for the not-quite-ex Mrs. Cook to go after what was left of Fanny’s millions, per a vintage Southern law that permits jilted spouses to sue their partners’ lovers.

Barrino and her family are the subjects of the VH1 reality sudster Fantasia: For Real.