Stick a fork in her! Sarah Palin’s unsuccessful bid to sell a second reality show has political analysts and celeb-watchers wondering: Has America finally seen enough of the former vice presidential hopeful? 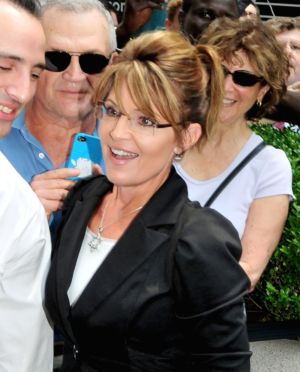 She can see Russia from her house.

We can see obscurity in her future.

The self-professed political maverick is having a tough time selling her latest docu-soap, The Hollywood Reporter said this week. The former Alaska governor and Mark Burnett Productions are presently shopping a reality TV show about hubby Todd Palin’s career as a championship snowmobile racer.

The project, however, is not catching on with the networks.

Both A&E Networks and TLC, which aired Sarah Palin’s Alaska, have passed on the Todd-driven feature, according to industry insiders.

Further complicating matters is the fact that the asking price tag per episode is reportedly close to $1 million.

Sarah Palin makes a major announcement: What is it? >>

The mother of five has been largely missing from the political arena since confirming that she would not run for the Republican presidential nomination in the 2012 race for the White House. Instead, attention has shifted to campaign frontrunners Newt Gingrich and Mitt Romney.

“I think it’s safe to say her time has passed,” one insider chuckled.

But after the blockbuster debut, Sarah Palin’s Alaska dropped to an average 3.2 million viewers a week.

The program was not renewed for a second season.

Would you tune in for another Palin reality show?