Kris Humphries might have cheated on Kim Kardashian in her own bed. Or, was it all a big publicity stunt? 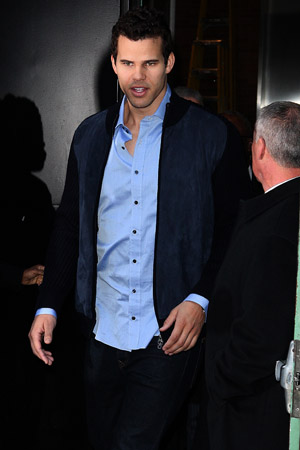 Somebody’s in trouble! Kris Humphries might have cheated on Kim Kardashian during their short marriage — and there’s video to prove it! Twitter user @shellimerci (now deleted) posted several photos of pretty blondes in the Gansevoort Hotel suite he shared with then-wife Kardashian.

“On Kim’s bed!” she tweeted, along with a photo of her sprawled on the luxe bedding. “Kim and kris’ closet!! Oh my god!!!”

The girl also posted a video of Humphries in the hotel room, though the video abruptly stopped when he realized it was going on Twitter.

So, does this prove that he cheated? Not so fast — there were E! cameras in the suite the whole time, according to RadarOnline. This makes us think it was all just another publicity stunt for Kourtney and Kim Take New York — and another attempt to make Humphries look like an idiot.

That doesn’t mean Humphries is all innocent, though. The New Jersey Nets baller was reportedly spotted partying multiple times without his wife, according to one tabloid.

“I couldn’t believe it,” a source told Star before the couple’s August wedding. “Kris was there with one of his friends, and they were getting a ton of attention from the girls at the bar. Two blond girls in particular caught Kris’ eye, and they were getting a little too cozy, especially considering it was the week of his wedding. At one point he had an arm around each of the two blondes. They were laughing and drinking and kept asking to feel his muscles.”

He was later spotted getting a lap dance in September.

“This guy just had the most televised wedding of the year next to the royal wedding. Is he really going to be seen in public completely disrespecting his new wife?” a spy commented to the tabloid of his escapades at Miami’s Fontainebleau hotel. “Jill and Lauren started dancing in his lap. It got really steamy, and Kris did nothing to push them away!”

So, what they’re saying is that their relationship was only for television cameras? Perish the thought!

Do you think Kris Humphries cheated on Kim Kardashian?