The Girl with the Dragon Tattoo is heading to theaters sooner than expected. Sony Pictures has announced plans to release the film one day early. 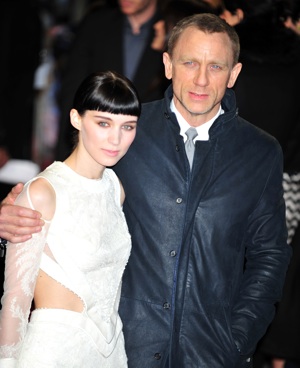 Sony Pictures is giving moviegoers an early Christmas gift. The studio has decided to bump up the release date for their highly anticipated drama, The Girl with the Dragon Tattoo.

The film was initially scheduled to debut Dec. 21, but will now open Dec. 20. According to The Hollywood Reporter, Jeff Blake, Sony’s chairman of worldwide marketing and distribution, says the new date will give fans an early start on the Dragon Tattoo phenomenon.

“This is one of the busiest times of the year for moviegoing and we can’t wait to share this outstanding thriller with audiences all over the world. We feel that by opening for nighttime shows on Dec. 20., fans of the book will be given the perfect opportunity to get a jump start on the release of the exceptional film.”

The Girl with the Dragon Tattoo is an American adaptation of the Swedish novel of the same name. The story centers on a journalist and private investigator who reopen a 40-year-old missing person’s case. The film is directed by David Fincher and stars Daniel Craig and Rooney Mara.

Similar to the summer months, studios become extremely competitive during the holiday season. Before its move, The Girl with the Dragon Tattoo was scheduled to open against Steven Spielberg‘s The Adventures of Tintin and Tom Cruise‘s Mission Impossible: Ghost Protocol.

Other notable releases include this week’s Alvin and the Chipmunks: Chip-Wrecked and Sherlock Holmes: A Game of Shadows. On Dec. 23, Spielberg will ride into theaters again with the drama War Horse, while Matt Damon and Scarlett Johansson headline Cameron Crowe‘s We Bought a Zoo.