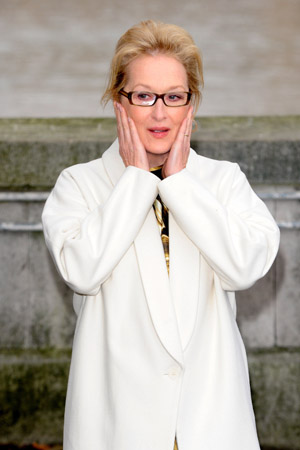 Who says all the cover girls are in their twenties? Certainly not Meryl Streep — she’s strutting her stuff on the January cover of Vogue!

“I was joking with the ladies earlier,” she said during the interview. “And I told them I was probably the oldest person ever to be on the cover of Vogue.”

She’s right: The Iron Lady actress, 62, is the oldest woman to appear on the fashion bible’s cover — a feat she never would have imagined as a 40-year-old actress. “I remember turning to my husband and saying, ‘Well, what should we do? Because it’s over,'” Streep said of turning 40. At that time, the only roles she received offers for were as witches.

“Once women passed childbearing age they could only be seen as grotesque on some level,” she added. It all changed when she starred opposite Clint Eastwood in the 1995 romance The Bridges of Madison County.

“The audience that were my girls, that I knew they’d get it if we could get the movie made,” she remembered of Bridges and other films that star “women whose usefulness had passed.”

Streep put that notion to bed completely with her incredible turns in films like The Devil Wears Prada, Mama Mia! And It’s Complicated.

“[I]n the period of Silkwood, [it] could never have been made, with a 60-year-old actress deciding between her ex-husband and another man. With a 40-year-old actress it would never have been made,” Streep said of the film that co-starred Steve Martin and Alec Baldwin. Now, she’s starring as one of Britain’s most powerful women of all time, Margaret Thatcher in The Iron Lady. Not too shabby!

Go on, Meryl! We’ll keep watching your movies — and buying your mag covers — no matter what your age.

What do you think of Meryl Streep’s Vogue cover?