Russell Simmons is trying to counteract the negativity over TLC’s All-American Muslim by buying up ad space on the show. 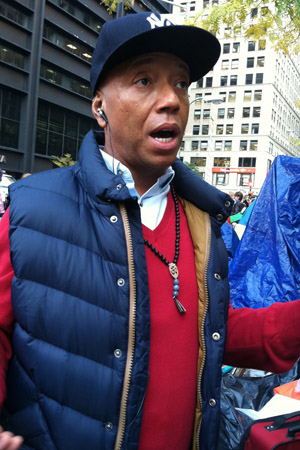 Russell Simmons is ready to put his money where his mouth is when it comes to TLC’s controversial reality show All-American Muslim. The hip hop mogul tried to buy out ad space for the hit show after home improvement store Lowe’s pulled their ads late last week.

“Just purchased remaining spots for [All-American Muslim] for next week,” the 52-year-old Occupy Wall Street supporter tweeted on Tuesday. “The show is now sold out! Keep your money and we will keep ours.”

Simmons was referring to a planned boycott of the superstore after company officials called the show “propaganda” for Muslims. He wanted to advertise his pre-paid Rush Card during the show, but was later told the remaining ad inventory was already sold out.

“I’m trying to buy ads during [All-American Muslim] airing this Sunday, but now they are saying they are sold out. I will keep trying…”

In a statement, Lowe’s argued that “[The show is] clearly designed to counter legitimate and present-day concerns about many Muslims… clearly this program is attempting to manipulate Americans into ignoring the threat of jihad and to influence them to believe that being concerned about the jihad threat would somehow victimize these nice people in the show.”

Their decision came after a Christian group, Florida Family Association, objected to the show’s showcase of five Muslim families living in the U.S.

“Lowe’s made the decision to discontinue our advertising on Dec. 5. As we shared yesterday, we have a strong commitment to diversity and inclusion, and we’re proud of that longstanding commitment. If we have made anyone question that commitment, we apologize,” the company said in a non-apology on Monday, adding that several companies pulled their ads.

Hmmm… something isn’t adding up here, Lowe’s. We’re with Uncle Rush on this: Showing positive diversity on television is always a good thing.

How do you feel about Lowe’s boycott of All-American Muslim?