After almost 20 years in Hollywood, Charlize Theron has finally met her match. In her latest film Young Adult, the Oscar-winner butted heads with a pint-sized actor who drove her absolutely insane! 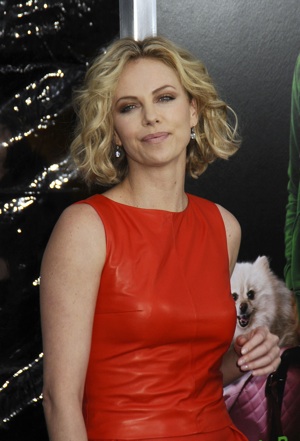 In the new dramedy Young Adult, Charlize Theron went head-to-head with her toughest co-star — a dog. In the film, she shares most of her scenes with a tiny Pomeranian, who plays her only friend and traveling companion.

Young Adult centers on Mavis, a recently divorced writer who returns to her small hometown looking for love. She plans to reunite with her former flame Buddy Slade (Patrick Wilson), but two obstacles stand in her way — his wife and child. Armed with her trusted dog and an oblivious attitude, Mavis prepares for the fight of her (love) life.

Monday night, Theron appeared on NBC’s The Tonight Show where she discussed the film and her canine co-star. She revealed that the dog cast in Young Adult isn’t a professional. It’s actually someone’s pet that was plucked from obscurity and placed in the movie.

The actress explained, “Jason Reitman, the director, saw this dog on the street and went ‘That’s Mavis’ dog!'” He then approached its owner and asked, “Do you want your dog to be in a movie?'” Obviously, they agreed and the rest is cinematic history.

When it came to shooting, Theron’s new scene partner had a hard time following directions. She said, “You couldn’t get it to focus for like two seconds. It was insane. It really was the perfect dog for Mavis but it was driving Charlize crazy.”

If you don’t believe her, Theron brought a few outtakes from the film that expose the dog’s onset antics.