Family man Matt Damon has come a long way since the days of the Oscar-winning film Good Will Hunting. We knew straight away that he was a talented screenwriter, and his acting has followed suit, with edge-of-your-seat action roles like the Bourne movies and laugh-fests like guest appearances on 30 Rock. Now, he acts alongside Scarlett Johansson in a heartwarming family comedy called We Bought A Zoo, which is about building a better life for his children… at a fixer-upper zoo. 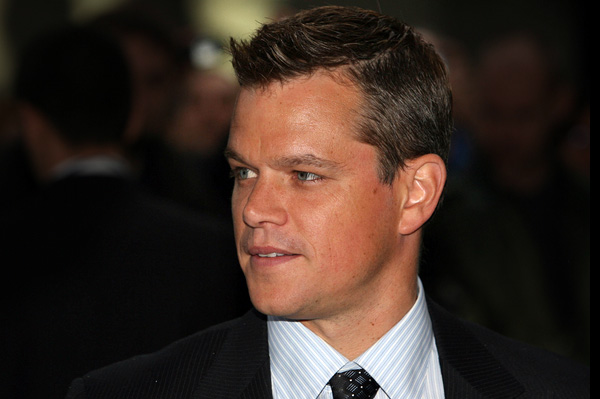 Blonde hair, blue eyes, East Coast heritage: Matt Damon is as American as apple pie, and his his outlook on life is equally delicious — freshly 40 and totally cool with that, this is one heartthrob who keeps getting better with time. 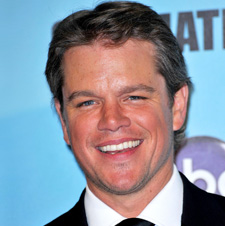 With acting, he knows what serious roles to take — and when it’s time to laugh:

Big box office movies like the Bourne trilogy and the Ocean’s films have enabled Matt Damon to take smaller roles that are more meaningful, such as his parts in Syriana and The Informant! And speaking of smaller roles, the video he made with comedian Sarah Silverman for the Jimmy Kimmel Show, “I’m F**king Matt Damon,” went viral in 2008 (and — we have to say it — made women everywhere a little bit jealous of that fictional relationship). He’s also made us giggle as a straight guy who insists he’s gay in Will & Grace and as Liz Lemon’s airplane pilot boyfriend Carol in 30 Rock. 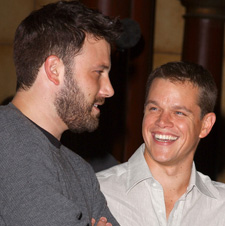 He and lifelong pal Ben Affleck are hot times two:

We all know there’s a bromance between Ben Affleck and Damon, but Damon says it’s actually more than that! Matt Damon recently told GQ that Affleck is his “hetero lifemate.” The two have their own production company, Pearl Street Films, and are developing a biopic about James “Whitey” Bulger, godfather of the Irish mob in Boston — Damon will play Bulger; Affleck will direct. Aw. We would have loved to see these two pair up onscreen again for double the sexy! 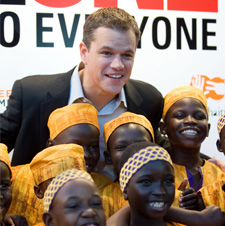 He’s dedicated to his charity:

Damon speaks up regularly about political issues, stands up for public-school teachers, and champions Water.org, which Matt Damon co-founded. The organization strives to provide clean water and sanitation to communities that need it. So far, Africa, South Asia, and Central America have been among the areas that have benefited.

What makes the charity so important to him? “For me, it’s actually that I see that when these things are implemented, the kind of effect that they have,” he said at the Critics’ Choice Awards this past January. “That’s a great story to be able to bring back. That is what gives me an optimism about it. That’s what Americans respond to — if you actually can come back with a demonstration that something is working, people will get involved. Hopefully as we get that method down more, we’ll get a groundswell of support.” 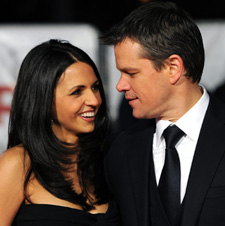 We love this love story! Matt met his wife, Luciana, when he was shooting Stuck On You and she was bartending in Miami; they married in 2005. Since then the pair has had three children together.

Was it love at first sight? “I don’t know if that’s me revising the memory as I get older, imbuing it with all the subsequent emotion that I felt and all the experiences that we’ve had since then,” Damon told Macleans Canada. “I feel like if I’m honest, that there was a halo of light around her and I absolutely knew that moment had changed my life before I even spoke to her, but I honestly don’t know whether or not that’s revisionism.” We say: However it began, it’s clear that they’re meant to be together, and we adore that about the happy family!