SheKnows hit the red carpet at the premiere of We Bought a Zoo to get all the hairy details of this hilarious film straight from the cast. 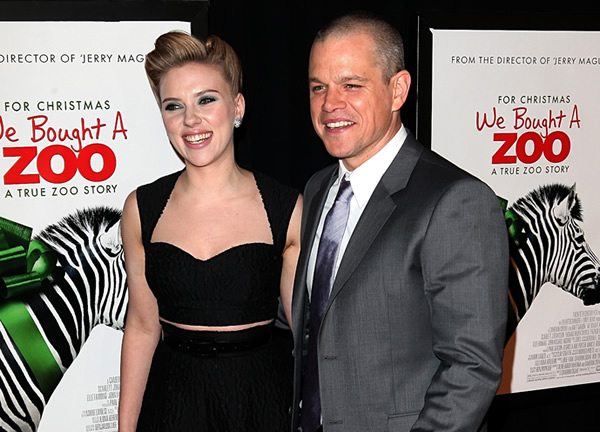 Lions, tigers and bears, oh my! The cast of We Bought a Zoo got to hang out with all those animals and many more while filming the fun family flick this year. At the premiere in New York City, we got to chat with them about their favorite furry friends.

“I like otters,” said Scarlett Johansson, who plays the head zookeeper in the film. “They’re so cute and they’re so social.”

Scarlett, a self-proclaimed animal lover, told us coming to set every day was pretty much a dream for her.

“It was pretty majestic,” said the actress. “You bring your family on set and you’re like, ‘Those are my lions, those are my tigers.’ I’ve always loved being around animals.”

Matt Damon, who plays the adventurous father who purchases the zoo, got quite the wild animal experience himself while getting into character for this zoo movie. Director Cameron Crowe told us that Matt had a close call with a rambunctious bear.

“The bear came up to the car, with Matt just one little shatter proof window away, and just slammed his paw into the window,” said Crowe. “We were all just like, ‘Oh my god, the shatterproof glass is going to shatter.'” Thankfully, it didn’t.

“It sure wobbled,” added Crowe, “And when the take was over, Matt turned to the rest of us and said, ‘I think we have that scene.'”

Matt graciously didn’t hold it against his burly co-star, telling SheKnows, “He didn’t mean to. It’s just that they’re so strong that by accident he could have crushed the car.”

Up and comer Elle Fanning isn’t afraid of the more dangerous animals, either.

“I loved the lion,” Elle told us. “Our lion was different because his mane was a darker color and his eyes were a darker color so it looked like he was looking straight into your soul.”

Elle even went so far as to say she would be a bear when asked to pick an animal affiliation.

Maggie makes friends with the monkey

Matt Damon’s daughter in the film, 7-year-old Maggie Elizabeth Jones, was more interested in the smaller animals on set.

When asked who her favorite was, Maggie told us, “Crystal the Capuchin monkey. She was very nice.”

Crystal has quite the resume, having also starred in The Hangover Part II and Night at the Museum.

Check out Crystal and the rest of the animals in this film when it hits theaters Dec. 23. Stay tuned for our interviews with the cast.