“Breaking Dawn worship” is the intellectual equivalent of holding a great big “loser stick.” That’s what James Franco thinks anyway. The studious star offers his candid (and sure to be controversial) thoughts about Part 1 of The Twilight Saga finale in a new film critique.

Hey Twihards, close your eyes if you don’t want to read what actor-director-poet-performance artist-failed Oscars host James Franco has to say about The Twilight Saga: Breaking Dawn — Part 1. 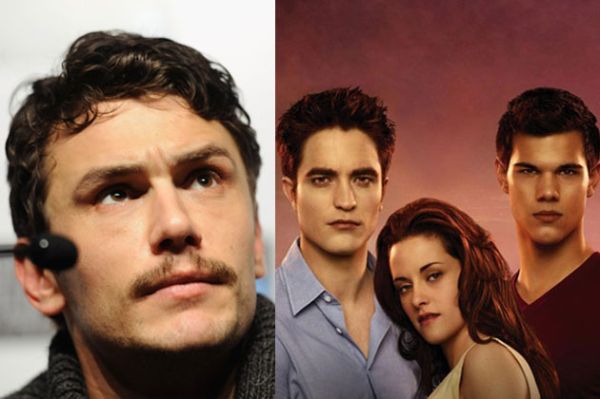 Now a published film critic, the studious star has lit into the teen vampire franchise for taking a hypocritical approach to sex and marriage.

Breaking Dawn — Part 1 has earned more than half a billion dollars at the international box office since its release last month. But James likens the work to George Clooney’s Oscar-bait drama The Descendants — for all the wrong reasons.

“Both [films] use sex as a submerged theme while on the surface promoting a wholesome idea of family values; both seem to devalue motherhood; and both deal with characters who are so financially secure that they are almost impossible to identify with,” Franco wrote in a critique for The Paris Review titled “Breaking Bad.”

Breaking Dawn sucked the life out of box office competition >>

“The protagonists finally marry, having waited until the wise old age of eighteen and since the book and the film dutifully show them being wed, they are then allowed to f— each others’ brains out. For a film that claims to be sexually responsible, the Twilight movies are awfully dependent on teenage sex to attract viewers,” he added.

For good measure, James was sure to throw in some extra barbs at the lead cast. Taylor Lautner took the brunt of the bruising. (It’s a good thing he’s so muscular!)

Franco compares the teen hunk’s shirtless delivery of lovelorn werewolf Jacob Black to something you’d see in an episode of Lifetime’s Toddlers & Tiaras.

“The actors prance about like pieces of meat, their disturbingly developed bodies on full display; Taylor Lautner’s rippling teenage chest is just a little better than the child beauty-pageant stars at the end of Little Miss Sunshine.”

Safe to say Franco isn’t a fan of the fang-tastic franchise?