Steven Spielberg steps back and lets the horses do their thing in War Horse. It’s out on Christmas Day. 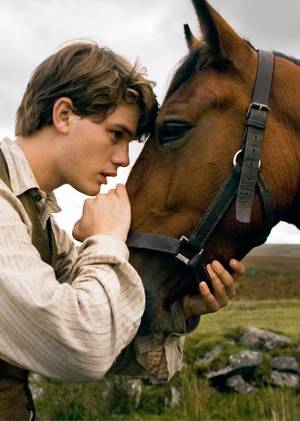 A horse is not just a horse to Steven Spielberg, whose new equine drama War Horse takes theaters on Christmas Day (Dec. 25).

“I only thought we’d get from the horses what they were trained to do, what actual scene that was written in the script that the trainers had way ahead of time,” said Spielberg in a DreamWorks promotional interview conducted in New York City on Nov. 27.

“It turned out that Joey [the horse], and I’m not going to speak for the horse because I don’t do that… but the amazing thing is that Joey had a sense of what was happening in the scene. I could never explain it but there were moments when Joey added things none of us asked for when the cameras were rolling that brought a performance to all of you that we didn’t expect when we made the movie.”

The movie War Horse, based on Michael Morpurgo’s 1982 children’s novel, tells the story of Joey the war horse, who is separated from his English owner and taken to France to do battle in World War I. The film will run concurrently with the Broadway version of the book.

It’s a story about the type of humanity that a horse can unveil.

“I thought War Horse was about the themes of connection that an animal, and sometimes only an animal, can bring out in warring factions,” Spielberg said. “A horse can bring two sides together.”

Joey’s owner is played by Brit newcomer Jeremy Irvine and the film was shot in various locations in England.

If you go, you better bring an extra tissue or two.

“I don’t want to force anybody to cry but if you cry because the story has affected you and the characters have deeply affected you, then I take that as a great compliment,” Spielberg said. “What I wouldn’t like is to be accused of is putting a suction tube to people’s eyeballs and starting the pump.”